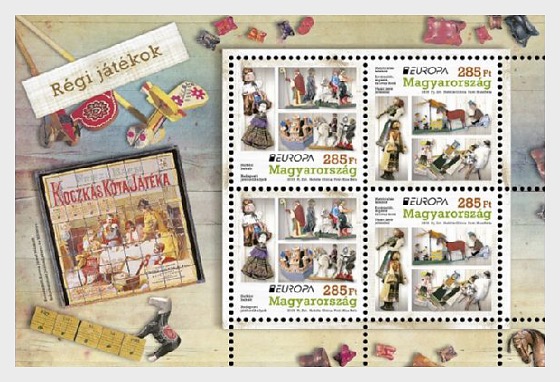 Each year PostEurop, the Association of European Postal Operators, offers its members the opportunity of issuing EUROPA stamps on a common topic. The designs entered in this stamp beauty contest are judged by the public and a jury of philatelic experts. The theme for this year is “old toys”. On Magyar Posta’s miniature sheet a few treasured toys from the Katona József Museum’s Szórakaténusz Toy Museum and Workshop in Kecskemét are shown. The first stamp has been entered in the Europa stamp competition. Fifty thousand copies of the miniature sheet designed by the graphic artist Glória Hefelle were produced by the Pénzjegynyomda printing company. The new issue will be available at large post offices and Filaposta in Hungary from 8 May, but may also be purchased from Magyar Posta’s webshop. “Today almost 18,000 historical pieces are kept by the SZÓRAKATÉNUSZ Toy Museum and Workshop, which include ancient snail shell toys, simple folk toys, high quality factory-produced toys from the pre-war era, individual pieces made by Hungarian craftsmen, as well as rarities from children’s literature, various toy collections and the world of magic. The range of articles made from various materials is very broad, which is enhanced by the special features of the traditional toys of different nations. In addition to individual artefacts, the collection includes important selections from the toy culture of neighbouring countries as well as Poland, Estonia, Mordovia, Mexico and Japan. The oldest article is a real masterpiece, a French jigsaw puzzle from the 1760s, while the newest pieces are individually crafted toys from today. The diverse bequests of the Udvardy and Kovachich families provide a special background for toys mainly from the late 19th and early 20th centuries” (Source: szorakatenusz.hu - TOYS AND GAMES: SECRETS, WONDERS, PLEASURES permanent exhibition organised by Ágnes Kalmár art historian and Mrs Mária Bihar Kepe local historian) The miniature sheet contains two stamp designs. One shows dolls from the Sárköz area as well as examples by Budapest toymakers, such as wooden toys by the artist and teacher Leon Grabowieczky, a mounted papier mâché hussar and a fairy-tale castle. The other stamp depicts dolls wearing the folk costume of the Matyó area, and games with a blacksmith, horse and cart, and figures from a fair with a shepherd. Other pieces from the Museum’s collection decorate the frame of the miniature sheet.