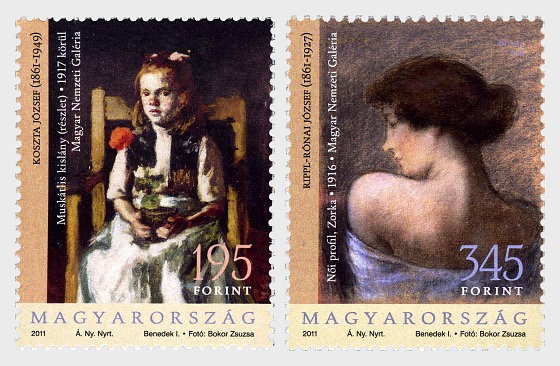 In the special stamp series entitled Arts Magyar Posta present the works of famous Hungarian artists. On one of the stamps in the series in 2011 a detail from József Koszta’s Small girl with geranium (around 1917, Hungarian National Gallery) can be seen and on the other there is the painting by József Rippl-Rónai entitled Female profile, Zorka (1916, Hungarian National Gallery). The first day cover belonging to the series is decorated by a work from each of the artists – József Koszta: Poppies (1910s, József Koszta Museum, Szentes) and József Rippl-Rónai: Final self-portrait (1927, Hungarian National Gallery) – the special cancellation stamp includes their signatures. József Koszta (Brassov, 27 March 1861 – Budapest, 29 July 1949) started his study of painting in the School of Decorative Arts and then continued at the Academy in Munich. After returning home he became a student of the Benczúr Gyula School of Masters being taught by famous painters – Károly Lotz and Bertalan Székely. After several awards and exhibitions between 1902-1903 he worked in Nagybánya. He travelled abroad to study to Paris, Rome and the Netherlands. After returning home he became a member of the Szolnok Artist Colony. Due to his withdrawn nature he lived and worked in a cottage near to Szentes for nearly 30 years. In 1937 he was made an honorary member of the Szinyei Merse Pál Association. His works mainly dealt with peasant life and landscape of the Great Plain. He made strong use of the possibilities provided by light and shadow, he also used strongly toned colours. His form of depiction was mainly characteristic of the dramatic, and of expressive realism. The bulk of his work included portraits, still life and landscapes. He received the Kossuth Award in 1948. He left his pictures to the Szentes museum, which took on his name in gratitude. József Rippl-Rónai (Kaposvár, 23 May 1861 – Kaposvár, 25 November 1927) Hungarian painter and graphic artist. He was a chemist’s assistant and then obtained a master certificate in pharmacy in Budapest. In 1882 he worked as a private tutor and took drawing classes. From 1884 he studied at the Academy of Art in Munich and in 1887 in Paris with Mihály Munkácsy later becoming his assistant. At the beginning the effect of Munkácsy could be seen in his work, but during his stay in France he got acquainted with new styles and trends. After returning home in 1902 he settled in Kaposvár. He was a founding member of the Hungarian Group of Impressionists and Naturalists and also took part in the Nyugat (West) movement. After from painting, he was also involved in the design and production of glass windows. In 1912 it was he who made the large glass window in the Ernst Museum. When World War I broke out he was detained in Paris and interned, he returned home to Kaposvár in 1915. He is regarded as the best Hungarian representative of post-impressionism and Art Nouveau. His painting is characterised by a rich world of colour, stylised lines and decorative features. At the beginning of the 1900s he painted pastels. He established a unique style, which he called “kukoricás” (maize-like): he applied the paints onto the canvas in a cotton wool, patchy manner. In his honour a Rippl-Rónai art award was set up in Kaposvár and in 1978 the Ripple-Rónai Commemorative Museum was opened. (Source: hu.wikipedia.org)