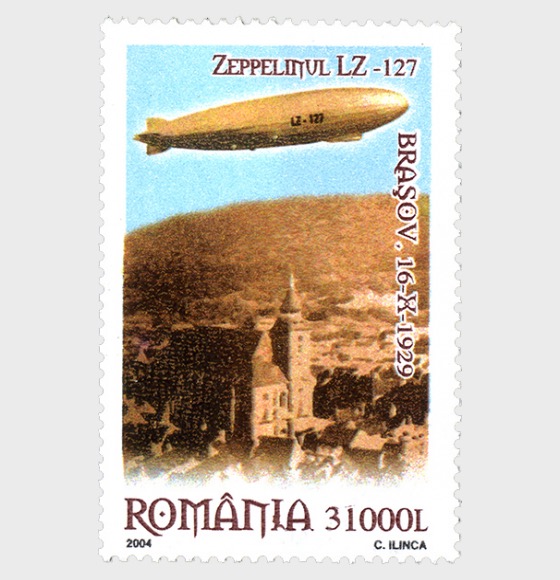 Events - 75 years since the flight of the Zeppelin over Brasov - Set for only GBP £1.19

On July 29th, 2004, Romfilatelia, the specialized company in issuing and trading philatelic items in Romania, releases the postage stamp issue entitled “EVENTS - 75 YEARS SINCE THE FLIGHT OF THE ZEPPELIN OVER BRASOV”.

The origin of the “zeppelin” word comes from the name of the Count Ferdinand Graf von Zeppelin (1838-1917). He was a general in the German Cavalry, diplomat and aviation pioneer. Since 1890, his main passion was to develop rigid airships. The Count built and patented the zeppelin 1900. The first airship of this kind rose from the ground for testing on July 2nd, 1900.

When the various restrictions imposed by the Treaty of Versailles on Germany were lifted, Germany was allowed to build airships. Between 1900 and 1938, were build 119 rigid airships, among them three air giants: the LZ-127 Graf Zeppelin, LZ-129 Hindenburg and LZ-130 Graf Zeppelin II.

The first and most famous, LZ-127 Graf Zeppelin, circled the globe in 1929. In August 1929 it took off with 20 passengers and 41 crew members on board. Taking off from Friedrichshafen, a small town in the south of Germany, the dirigible balloon crossed the Atlantic Ocean, United States, Pacific Ocean, Japan, Siberia and Eastern Europe. The Graf Zeppelin also flew across over some cities in Romania, among which the city of Brasov, on October 16th 1929. The legendary flight ended at the same place where it started, in Friedrichshafen.

The journey made by LZ-127 in August-September 1929 was the fastest travel around the world, at that time. Graf Zeppelin needed only 12 days to circle the globe. The travel around the world and the polar journey, which took place in 1931, made the Graf Zeppelin airship world-famous, at this time. In June 1937, the LZ-127 was taken out of service and was given to the museum in Frankfurt.

Even though the Hindenburg and the Graf Zeppelin II were technologically superior to LZ-127, no other airship has been so loved. The Graf Zeppelin was considered one of the finest airships ever built.

During its 10 years of flights, the Graf Zeppelin flew 590 times, including 144 ocean crossings. It flew more than one million kilometers and crossed almost every continent, carrying more than 10,000 passengers. None of the airships in history attracted such attention and admiration of so many people.