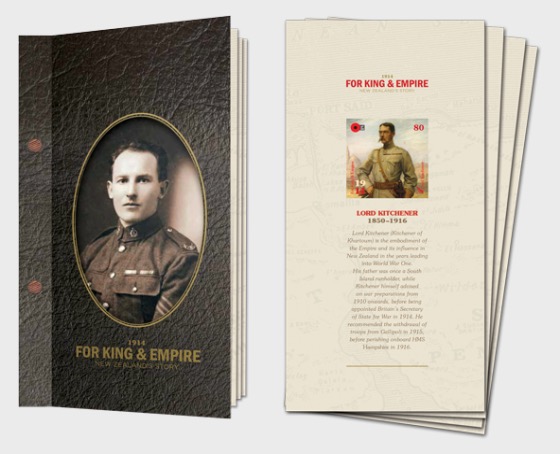 About 1914 For King and Empire (Miniature Sheet Booklet)

At 3pm on 5 August 1914, an audience of around 15,000 huddled together in front of the steps of parliament. The crowd excitedly cheered as the Governor, Lord Liverpool stepped forward from a group of his peers. As he made the announcement, you could feel the crowd’s sparks of excitement grow into a roaring flame. Wellington was abuzz with the news that had spread throughout the city – New Zealand was going to war.

In the coming years of this five-year commemorative programme, we look at the war from a New Zealand perspective. From the front line to the home front, New Zealand was changed forever while this experience began to forge our identity as a confident, stand-alone country.

In 2014, we looked at the untold story of New Zealand serviceman and everyman, Melville Mirfin. Like thousands of others, Mirfin left his family behind and answered the call to go to war, but unlike so many soldiers, he not only survived the war, but he survived the action from one end of the war to the other.

Learn more about the Melville Mirfin story. Mirfin was an everyday New Zealander who answered the call to defend King and Empire. Mirfin’s unlikely story spans across the five years of the war, taking him from his humble home town of Ikamatua to Samoa, Egypt, Turkey, the Western Front and finally to London.

This commemorative book, designed to look like a pocket book like soliders carried in the war, is written by Mark Di Somma with assistance from the Mirfin family (including Melville’s son John Mirfin). This commemorative book was the first in our five year series, and when you purchased the book, you received a commemorative case to contain the full series.

The individual stamps in this issue were:

Lord Kitchener (Kitchener of Khartoum) is the embodiment of the Empire and its influence in New Zealand in the years leading into World War One. He recommended the withdrawal of New Zealand troops from Gallipoli in 1915, before perishing onboard the HMS Hampshire in 1916.

The Defence Act of 1909 was the first step towards compulsory military training, enacted in 1911 (on advice from Lord Kitchener). By 1911, posters such as this one could be seen throughout New Zealand.

When war was announced on the 5th of August 1914 (New Zealand time) it was not a declaration as such, but a proclamation that, as part of the British Empire, New Zealand was at war.

Melville Mirfin was a bank clerk from a family of seven from Ikamatua on the West Coast of the South Island, who, alongside many others, signed up for war the same week of the proclamation on August 5th.

War inevitably split families across continents and the Mirfin Family is pictured here prior to war, showing all the brothers who would serve and survive.

The Limerick, also known as HMNZT 7, was one of ten troopships in the ‘First Fleet’ that took the NZEF, their horses, and equipment to Egypt in 1914, meeting up with the Australian Imperial Force enroute.

Training camps such as this one in Canterbury readied troops for the NZEF, destined for Europe (they would instead go to Egypt) before the year’s end.

Karaka Bay, Wellington, in 1914 – Semi-rural, with some modernity, less than half New Zealand’s population prior to World War One was considered urban, a number that would increase to sixty per cent by the war’s end.

New Zealand’s first duty in World War One was capturing Samoa from the Germans. Melville Mirfin, who had signed up for the NZEF in the first days of August, travelled to Samoa with 1,385 men, during which he would write many times to his family.

By the end of 1914 the first troops of the New Zealand Expeditionary Force had arrived in Egypt for training. For many it was their first time away from New Zealand shores, and they found themselves in front of the Pyramids of Egypt, ready for what was supposed to be the great adventure.