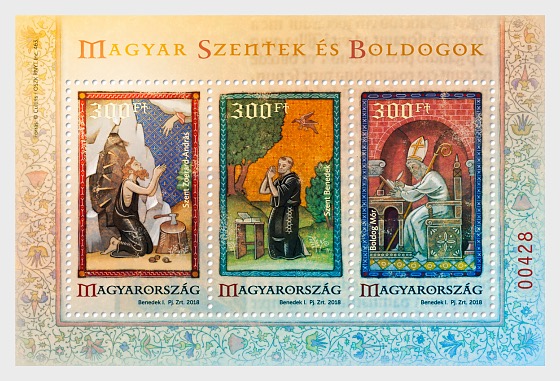 Concurrently with the standard edition of the souvenir sheet Hungarian Saints and Blesseds VI, presenting Saint Andrew Zorard, Saint Benedict and Blessed Maurus of Pécs, a special red-numbered edition produced by diffractive printing and a numbered limited edition black print are also being released on 1 August 2018. The special edition together with the black print is also available in an exclusive set but the black print is only sold as part of the set. The new editions designed by the graphic artist Imre Benedek were produced by the banknote printing company Pénzjegynyomda, and will be available at first day post offices and Filaposta in Hungary and can also be ordered from Magyar Posta’s onlinestore.

Although the standard edition of the commemorative souvenir sheet Hungarian Saints and Blesseds VI is a noteworthy artwork in itself, since Magyar Posta has devoted the same special attention to this topic as in previous years, this stamp is also being released in a special edition and as a black print with identical graphics to that in the standard edition.

The sheet presents the hermits of Mount Zobor, Saint Andrew Zorard and Saint Benedict of Skalka, who were the first saints of the medieval Kingdom of Hungary. Tradition holds that they were canonised in July 1083 prior to Gerard and his fellow martyrs as well as King Stephen and his son Prince Emeric being declared saints. The third person on the souvenir sheet is Blessed Maurus of Pécs, who wrote down the legend of Andrew and Benedict.

In the early 13th century the Benedictine monastery of Skalka was founded in honour of Saint Benedict and All Saints near the cave where Andrew and Benedict lived as hermits. The Catholic Diocese of Nitra honours the holy hermits as its patron saints, and Andrew is also the patron saint of Nitra. The legend about the hermits of Mount Zobor by Blessed Maurus of Pécs is part of the traditions of hagiography (writing the lives of saints), yet it occupies a special place in Hungarian literature. This is one of the earliest texts relating legends (originating from between 1064 and 1070), whose author reveals unusually much about himself. The reader learns, for example, that he himself knew Benedict in person, and owned the hermit’s penance belt. His main source was Abbot Philip’s testimony.

An interesting feature of the sheet is that part of a Latin text about Saint Andrew Zorard, which describes the same miracle as that recorded by Blessed Maurus of Pécs, is faintly visible in the top right. Its design gives the impression that the lines are seen through a thin page of a codex from the back. The sentence reads: “Nolite fratres formidare, neque fugere, sanctus enim Zoerardus me a morte suscitavit ad vitam”, which translates: “Do not fear and do not flee, Brethren, as Saint Zorard raised me from the dead.”

(The black print included in the stamp set cannot be used to pay for postage.)