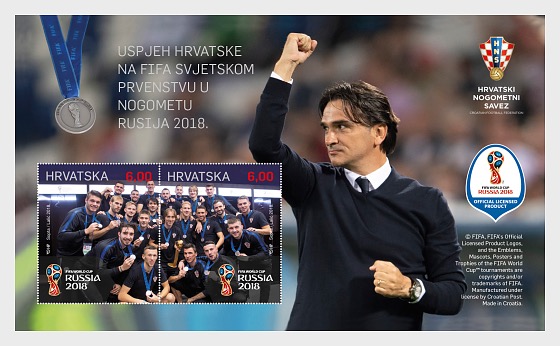 Croatia's Success at the 2018 FIFA World Cup Russia - Miniature Sheet for only GBP £1.54

About Croatia's Success at the 2018 FIFA World Cup Russia

The 21stFIFA World Cup™ will be remembered for a long time in Croatia. Eleven cities in the largest country on the planet hosted the competition from June 14thto July 15th, 2018. At the tournament in Russia, Croatia was only the 13thfinalist of the largest global football show in the history. In terms of the number of citizens, Croatia was the second smallest country in those finals. Only Uruguay, a double world champion in 1930 and 1950, had less citizens. At the spectacular finale that took place at the Luzhniki Stadium in Moscow, France won 4:2 and took its second world crown. However, the silver won by the team under the leadership of Zlatko Dalić is also a miraculous success. This was proven by the fact that more than half a million people waited to greet the team on the streets of Zagreb, the capital of Croatia, a day after the finals. Those were 29 truly incredible days between the first and the last game played by the Croatian team in Russia.

The story started in Kaliningrad on June 16thwhen more than 10,000 Croatian football fans witnessed Croatia’s first victory against Nigeria. Croatia celebrated 2:0, at first, Mario Mandžukić provoked with an own goal and then managed to get a penalty shot that Luka Modrić turned into a score. Five days later, there was a magnificent collision with Argentina, a double world champion knocked out of the tournament in Nizhny Novgorod. Lionel Messi could not help the Gauchos, Ante Rebić, Luka Modrić and Ivan Rakitić scored 3:0 in a triumph that echoed around the world. After only two games, Croatia secured its advancement from Group D. However, they could not relax as they played against Island on June 26th. Dalić gave a chance to many background players and the boys did not miss this opportunity. Milan Badelj and Ivan Perišić scored in the 2:1 win in Rostov-on-Don, a triumph that brought Croatia the winning spot in the group and a date with the Danish for an opportunity to advance in the tournament on July 1stin Nizhny again. It was the start of a dramatic knockout phase of the 2018 FIFA World Cup Russia™.

Denmark took the lead, Mario Mandžukić evened the score, and they went into overtimes where Kasper Schmeichel managed to stop Luka Modrić’s penalty shot. It was not fatal, Danijel Subašić managed to defend the goal against three penalty shot attempts by the Danish, and Ivan Rakitić scored the last one at 11 meters. A similar story took place six days later in Olympic Sochi during the quarterfinals. Andrej Kramarić evened the score to 1:1 after the Russians took the lead, and Domagoj Vida helped Croatia gain the lead during the first overtime. The Dalić boys could not keep it up as the Russians scored 2:2 and the fate of the Croatian football team rested on the penalty shootsts once again. Fortune was on the Croatian side one more time. Danijel Subašić defended another shot, the Russians fought near the goal and Ivan Rakitić sealed the deal once again. Croatia reached the semi-finals, the first and only one after the glorious 1998. However, unlike France, Croatia, twenty years later, did not stop at the semi-finals.
After taking an early lead, England hoped to keep the Croatians back with their toughness, but was wrong about that. Once Ivan Perišić evened the score during the second half, there was only one team on the field in Moscow on July 11th. Three lions signed capitulation, the shooter for the 2:1 win, during overtime again, was Mario Mandžukić.

Croatia fought for its place in the finals, due to overtime it played 90 minutes longer than its opponent in the fight for the gold, an entire game more. This was not visible on the field, Dalić's team ruled the field and showed the world how much it was worth. It was not visible in the score, there were too many classic football details that went to the French side. The scores by Ivan Perišić and Mario Mandžukić were not enough this time, Les Bleus celebrated with a 4:2 win and became the champions of the world. Croatia was left with a great silver, pride because of the magical success and the Golden Ball, award for the best player at the 2018 FIFA World Cup Russia™ went into the hands of its captain, Luka Modrić, who deserved it.

The finals of the 2018 FIFA World Cup Russia, silver won with a great style, a fiery welcome... Croatia will remember this football summer of 2018 for a long time.