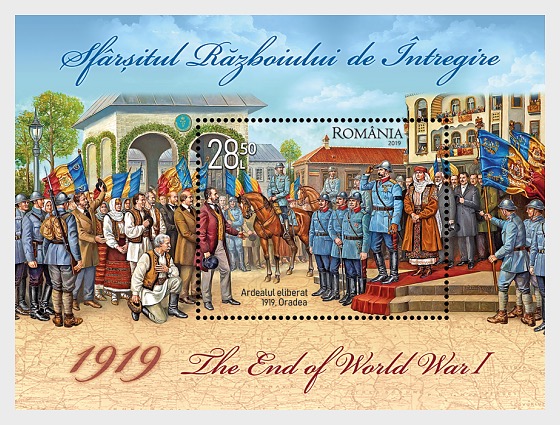 Romfilatelia introduces into circulation on Tuesday, July 9th a postage stamps issue with a historical subject: 1919, The End of World War I, materialized in the form of a perforated souvenir sheet with a stamp that has a face value of Lei 28.50.

The graphic alongside the image of the postage stamp replicates the painting depicting the reception of King Ferdinand and Queen Mary in Oradea in the year 1919. Valentin Tanase is the author of the painting that is located in the Hall of Council of the Oradea City Hall.

The postage stamps issue marks the end of the military confrontations that took place after the general armistice in 1918, the events generated by the attacks of the Hungarian troops on the territory of Transylvania, which had decided on December 1st, 1918 the union with the Kingdom of Romania.

The resistance of the enemy forced the Romanian troops to advance to Budapest, where they entered on August 6th, 1919 - the date that marked the liquidation of the Bolshevik armed forces in Hungary.

On the First Day Cover,it was reproduced the image of King Ferdinand next to General Mosoiu saluting the Guard of Honor in eliberated Oradea in the year 1919.

The First World War (1914-1918) manifested itself as an unprecedented conflict in the history of mankind, engaging 33 states on five continents, with over one billion inhabitants. It lasted 52 months and caused fundamental geopolitical changes as well as profound changes in the lives and the attitude of peoples.

In the summer of 1914, the Central Powers (Germany and Austria-Hungary) ruled for a radical and violent power review in the Balkans, Europe and the world. Under the pretext of the assassination of Prince Franz Ferdinand of Habsburg in Sarajevo (June 28th, 1914), Austra-Hungary declared war on Serbia (July 28th, 1914). In less than a week, with all diplomatic efforts to halt the expansion of the conflict, the war spread without anyone guessing its duration and, in particular, the consequences.

After a period of neutrality, Romania entered the Great War alongside the Entente (France, Russia and the United Kingdom) as a result of its desire to fulfill its modern development, inaugurated on the occasion of the union of Moldavia and Wallachia on January 24th, 1859 and continued with the winning of complete independence, in the anti-Ottoman war (1877-1878), which was recognized by the Berlin Peace Congress in June-July 1878.

On August 27th, 1916, at the Crown Council meeting at the Cotroceni Palace, in the presence of King Ferdinand I, declared war on Austria-Hungary. Romania’s entry into the Great War was widely regarded as an important political success for the Entente.

Attacked on several fronts, after bloody confrontations, the army, the Romanian Government and the Royal family retreated to Moldova, setting a strong line of resistance against German troop assaults. Iasi became by the end of 1918 the second capital of the Kingdom of Romania.

After the battles of Marasti, Marasesti and Oituz in the year 1917, the Romanian army resisted the offensive attacks of the German troops heroically. In November 1918, the armistice ended the First World War.

For Romania, the situation is totally different. On December 1st, 1918, Transylvania joined the Kingdom of Romania, after Bessarabia and Bucovina. The ongoing state of war was not wanted, but it was imposed by the Union’s opponents. Working in a legitimate defense following the attacks by the Republic of Councils in Hungary (April-May and July-August 1919), the Romanian army defeated its adversary by occupying Budapest on August 4th-6th, 1919. The war against the Bolshevik troops was appreciated by Nicolae Iorga: “In Budapest we did not seek to offend the pride of a nation often linked in history with ours ..., but we have affirmed our right to Transylvania, where our nation relies seniority of the people living there, numerical preponderance, geographical necessity and especially the freely expressed will of most of its inhabitants, today equal entitled citizens of the Romanian state”.

The postage stamps issue 1919, The End of World War I will be available on Tuesday, June 9th 2019, in Romfilatelia’s shopsnetwork in Bucharest, Bacau, Brasov, Cluj-Napoca, Iasi and Timisoara and online on http://romfilatelia.ro/store/.