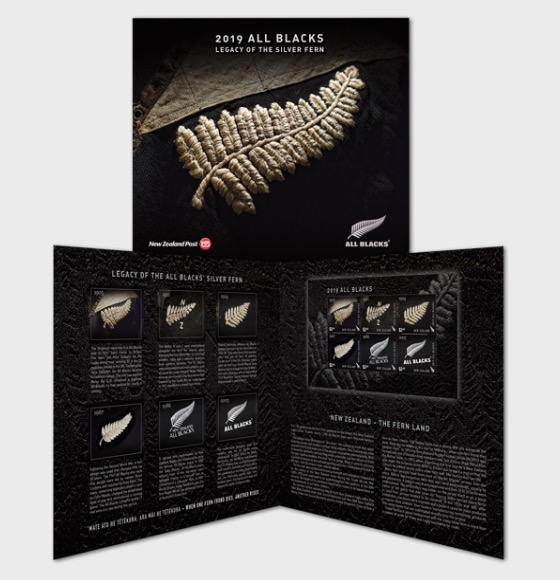 About 2019 All Blacks Presentation Pack

It is 135 years since the fern first appeared on the breast of a New Zealand rugby jersey. To date, nearly 1,200 All Blacks have worn this now-famous icon. Today the black jersey emblazoned with the iconic silver fern is more than a symbol of pride for Kiwis and rugby excellence for rivals.

Many fern designs have been used on the All Blacks’ jerseys over the years. Before mechanisation each fern was hand embroidered, usually by the one person. A pattern was drawn, approved and then 20 to 30 ferns were embroidered. The embroidery was either on the jersey itself or on a black cotton or felt patch that was sewn on. Touring sides carried spare ferns in case their jerseys needed to be replaced. In the 1950s and ’60s, after embroidery machines were invented and a pattern could be mass produced, a regular style evolved. Now modern manufacturing technology produces fine-detail ferns that are sublimated directly onto the jerseys.

1905 - The ‘Originals’ were the first All Blacks side to tour ‘back home’ to Britain. The team put New Zealand on the rugby world map, winning 32 of the 33 matches played in the UK. Captained by Dave Gallaher, the All Blacks became household names. The only loss against Wales (by 3-0) contained a disputed All Blacks try that rankled for nearly a century.

1921 - The letters N and Z were embroidered alongside the fern for several years following the First World War. For returned soldiers, rugby was a welcome diversion from wartime hardship. The All Blacks were reassembled and many players, such as powerful loose forward ‘Moke’ Belliss, were ex-servicemen. The first visit to New Zealand by the South African rugby team in 1921 resulted in a drawn test series.

1924 - Several distinctly different All Blacks jerseys were worn by the ‘Invincibles’ of 1924-25. They were given that moniker after they won all their 30 matches on the tour of the UK. Nineteen years after the first tour, the All Blacks were determined to avenge the loss to Wales and were victorious with an astounding 19-0 scoreline. Young fullback George Nepia played in every match.

1967 - Following the Second World War, a fern design was used that changed little for 30 years. The 1967 All Blacks who wore this design were led by captain Brian Lochore and coached by Fred Allen. The team, containing legendary players such as Colin Meads, changed the established style of play and reintroduced a running game. The All Blacks scored a record 17 test wins in a row during this period.

1986 - A stylised fern trademarked by New Zealand Rugby was introduced to grow the famous All Blacks brand. In 1986 the ‘Baby Blacks’, an All Blacks team without most of the big-name stars, defeated France in a one-off test at Christchurch's Lancaster Park. In 1987 the All Blacks, led by David Kirk, won the first Rugby World Cup, defeating France at Auckland's Eden Park.

2003 - The modernised triangular silver fern remains, with the All Blacks words emphasised. In 2003, before the Rugby World Cup, the All Blacks overpowered their Tri-Nations foes, scoring 50 points in each match in Australia and South Africa. The speedsters on the wing, Doug Howlett and Joe Rokocoko, scored eight tries between them. The famous fern logo still adorns the chests of players today.

Find out more about the origin of the fern as a symbol of strength in New Zealand with this presentation pack, with commentary by Stephen Berg of the New Zealand Rugby Museum. The pack includes a mint 2019 All Blacks miniature sheet.