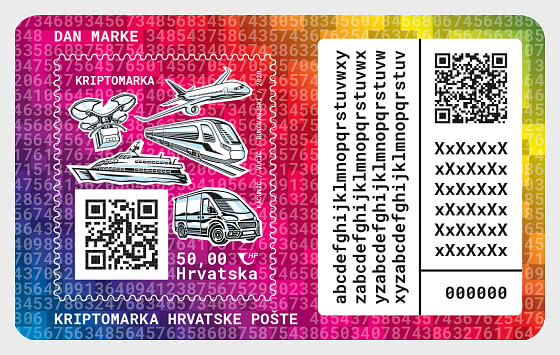 Croatian Post, in cooperation with the Croatian blockchain community gathered around the Blockchain and Cryptocurrency Association, presents the Croatian crypto stamp. An incredible combination of philately and modern technology arrives in the 12th year after the appearance of blockchain technology in its first emanation – the bitcoin cryptocurrency.

The Croatian crypto stamp is envisioned as the perfect combination of the analogue and the digital. After purchase of the crypto stamp, the part used for paying the postage may be detached, while the digital part remains to be used in the blockchain. Stamps are represented in the blockchain as the so-called unique or non-fungible tokens (NFT) under standard ERC721. Such non-fungible tokens have collectible value, just like classic stamps, which means that philately is faithfully transposed into the digital world. Since such tokens are located on the Ethereum platform, they have the potential to live forever, which adds another dimension to philately – protection from deterioration caused by passage of time.

The web shop (kripto.posta.hr/marka) in which Croatian Post will enable the purchase of crypto stamps is envisioned as an interactive mosaic that offers the option of paying for the stamp using cryptocurrency. In order for collecting to be faithfully transposed into the digital world as well, crypto stamps will be divided into different categories, emphasizing distinctiveness and exclusivity. Five different means of transport were selected as motifs for the categories. One of the categories will be limited to only 1,000 copies (the drone motif category), while the van motif category will be issued in the largest quantity (60,000 copies). Motifs also include train (25,000 copies), ship (10,000 copies) and airplane (4,000 copies), which, along with the two above categories, brings the total quantity to 100,000 stamps.

The crypto stamp project is extremely important for the development of this relatively new industry in Croatia, but also for putting Croatia on the blockchain world map, as well as on the world philately map, since the crypto stamp also marks an anniversary: 180 years since the first stamp, the “Penny Black”, was issued.

Whether digital albums will replace philately albums remains to be seen, but it is already clear that the passion that people have for collecting rare items did not disappear with the emergence of digital technologies.