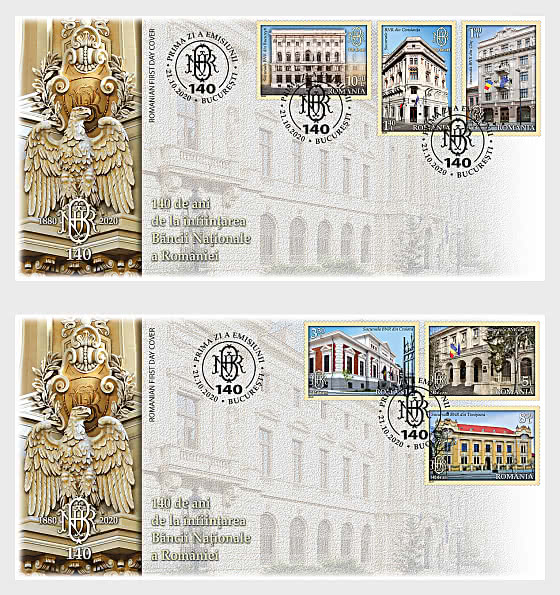 140 Years since the Establishment of Banca Națională a României - First Day Cover for only GBP £11.99

About 140 Years since the Establishment of Banca Națională a României

The issue, consisting of six postage stamps, an imperforated souvenir sheet and a philatelic block, illustrating the BNR New Palace and the buildings of the regional branches, will enter into circulation on Wednesday, October 21st.

Banca Națională a României, one of the oldest institutions of our state, was established by a law published on 17th/29th of April.

At the beginning of 1881 the first banknote having the face value of 20 lei was issued. This banknote depicts the Emperor Trajan effigy and characters which are symbols of industry and commerce.

Banca Națională a României fulfilled a crucial role in our country’s life, not only from the financial point of view but also from the social and cultural ones. After 1989, BNR has been involved in the transition from a centralized economy to the market economy, thus radically contributing to the structuring and consolidation of the banking system in contemporary Romania.

The postage stamp with the face value of Lei 1.40 reproduces the architecture of the building of the BNR Branch in Constanța.

Starting its activity in the last decade of the 19th century, the agency and afterwards the branch of Banca Națională a României in Constanța, has had over time several building, the first of them being situated at 30 Remus Oprean Street. The increase of attributions and of the number of branch’s employees made the management of Banca Națională a României to look for buildings more appropriate for the size of operations carried out by its branch situated on the shore of the Black Sea.

This building (the former “Mercur” Hotel) had been built in the period 1913-1916 in an Eclectic style, after the blueprints signed by architect Nicolae Michăescu (1863-1934), a graduate of the School for Bridges and Roads of Bucharest and of École des Beaux-Arts of Paris.

The rehabilitation of the building of Constanța regional Branch, the former “Mercur” Hotel, included as of 2004 on the list of historical monuments, demonstrates the permanent preoccupation of Banca Națională a României for the conservation of its real estate patrimony which is a part of the national cultural patrimony.

The building of the BNR Branch in Cluj is reproduced on the stamp with the face value of Lei 1.90.

The first building where the BNR Agency and, since 1927, the BNR Branch, carried out its activity, is situated at 28 Memorandului Street, and entered BNR patrimony through the convention of January 1922.

Starting with 2004, the building of 7 Unirii Street has been consolidated and restored under the coordination of architect Adrian Spirescu, aiming at adapting the work spaces to the requirements of an activity carried out by a central bank. They rehabilitated and redecorated all offices and the treasury. At the same time, in the former hall of front offices, the stained glasses and mosaics were reconditioned by the artist Makkai Andras, and the space was given a new destination as it was turned into “Ion Lapedatu” Conference Hall.

The restoration works of the building of Cluj regional branch were completed in 2008, while managing to render this building registered on the list of historical monuments the splendour and elegance of the beginning of the 20th century.

On the postage stamp with the face value of Lei 3.30 is depicted the building of the BNR Branch in Craiova.

In March 1881, when Craiova Branch started its activity, it was carrying out its operations in a rented building situated on Sfinții Arhangheli Street.

From the architectural point of view, the edifice is characterized by elements of exterior decoration specific to the Neoclassic style of Carol I’s epoch. The interior is organised around a central hallway situated on the axis of the main entrance, this manner of space organisation being a feature of the bank buildings at the end of the 19th century. The building in which Dolj regional branch carries out its activity, a component of the architectural patrimony of Craiova town, has regained its glory of yesteryear following the consolidation and restoration works taking place between 2015 and 2018.

The building of the BNR Branch in Iași is illustrated on the postage stamp with the face value of Lei 5.

In Iași the Branch of the Banca Națională a României started operating in March 1881. Operations took place in a building situated in Carol Street rented from Dimitrie Cozadiu. The building erected for Iași branch according to the blueprints of architect-engineer Nicolae Cerkez was destroyed by bombardments at the end of World War II. In order to provide its building of Iași with a proper space for the carrying out of its activity, in the spring of 1946 the Banca Națională a României management commissioned architects Radu Dudescu, Nicolae Crețoiu and Spiridon Spirescu, employees of BNR Architecture Department, to design the new building of the branch.

The consolidation and restoration works carried out between 1994 and 2002 tried to preserve the original architectural elements in order to place the building of Iași regional branch of BNR among the emblematic edifices of city’s architectural patrimony.

The postage stamp with the face value of Lei 8.50 reproduces the building of the BNR Branch in Timișoara.

The edifice where the activity of the Banca Națională a României – Timișoara Branch has been carried out since the establishment thereof was built between 1903 and 1904 on a land bought from Timișoara City Hall against 100 crowns, and entered the BNR patrimony through the convention of January 1922.

The preoccupations of the Banca Națională a României for the conservation of its architectural patrimony may also be seen in the restoration and consolidation works carried out between 2004 and 2005 for the building of Timișoara branch. These works consisted in the restoration of the façade, the roof and the fence with the aim to restore the splendour of one of the most beautiful and representative edifices making up the rich cultural patrimony of Timișoara.

The building of the BNR Branch in Bucharest is shown on the last stamp of the series with the face value of Lei 10.50.

The blueprint of the building, built between 1923 and 1928, was made by architects George M. Cantacuzino and August Schmiedigen combining the grace and elegance of the architecture specific to Italian Renaissance with the most modern facilities necessary to the banking activity. The edifice overlooks two streets - 16 Lipscani and 7 Stavropoleos - and has two basements, a ground floor, five storeys and an attic.

Purchased in 1933 by Banca Națională a României, the Palace was turned into a work space for some of the departments belonging to the institution. After 1990, the edifice erected by Jean N. Chrissoveloni became the building of Bucharest Municipality Branch, known today as Bucharest regional Branch of BNR. Between 1993 and 1998, Chrissoveloni Palace went through a vast process of restoration and consolidation under the coordination of architects Gabriel Tureanu, Constantin Rulea, Aurel Ioncică and Eliodor Popa. The fact that the project by which the palace regained its splendour and force, was awarded by the Romanian Union of Architects represents the recognition of the value thereof.

The imperforated souvenir sheet of the issue having the stamp with the face value of Lei 29, reproduces the image of the New Palace of the BNR in a graphic association that highlights the architecture of the Old Palace and the statuary group of the BNR founder Eugeniu Carada. The philatelic block brings together the six stamps of the issue (with images of the architecture of the territorial branches) in a graphic ensemble in which a decorative architectural element from the Marble Hall of the Old Palace is presented, along with the BNR logo and defining texts of the anniversary event.

Romfilatelia thanks Banca Națională a României and the photographer Lucian Tudose for the documentary and photographic support granted in the achievement of this postage stamps issue.