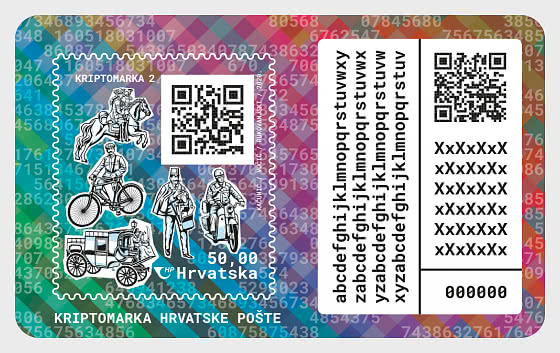 The PVC base souvenir sheet contains one stamp.

Croatian Post, in cooperation with the Croatian blockchain community gathered around the Blockchain and Cryptocurrency Association, presents the Croatian crypto stamp 2. An incredible combination of philately and modern technology arrives on the eve of the 12th year after the appearance of blockchain technology in its first emanation – the bitcoin cryptocurrency.

The Croatian crypto stamp is envisioned as the perfect combination of the analogue and the digital. After purchasing the crypto stamp, the part used for paying the postage may be detached, while the digital part remains to be used in the blockchain. On the blockchain, stamps are represented as so-called irreplaceable or non-fungible token (NFT) according to the ERC721 standard. Such non-fungible tokens have collectible value, just like classic stamps, which means that philately is faithfully transposed into the digital world. Such tokens are located on the Ethereum network, thus they have the potential to live forever, which adds another dimension to philately - protection from deterioration caused by the passage of time.

The web shop (crypto.posta.hr/stamp/v2) where Croatian Post enables the purchase of crypto stamps is conceived as an interactive mosaic that provides an opportunity to pay for a stamp with cryptocurrencies. In order to faithfully translate collectibles into the digital world, cryptographers are divided into different categories with an emphasis on uniqueness and exclusivity. The motifs of crypto stamps for individual digital categories are related to the transfer of postal items throughout history, and five different ones have been identified. Thus, one digital category is limited to 3,000 copies (mail coach), while the largest edition issued a stamp with the motif of an Austro-Hungarian postman (9,000 copies). A postilion on horseback (4,000 copies), a telegraph deliveryman on a bicycle (6,000 copies) and a postman on a moped (8,000 copies), together with the previous two categories, make a total circulation of 30,000 copies. It is interesting that each digital category in the Crypto stamp 2 has a corresponding exclusive gold-plated version. Only 5 of the 30,000 digital categories are available in gilded edition.

The crypto stamp project is extremely important for the development of this relatively young industry in Croatia, but also for putting Croatia on the blockchain world map, as well as on the philatelic world map.

Whether digital albums will replace philately albums remains to be seen, but it is already clear that the passion that people have for collecting rare items has not disappeared with the emergence of digital technologies.

President of the Blockchain

HISTORY OF THE TRANSFER OF POSTAL ITEMS

Throughout the long history of news transmission, the postman is the constant on which the whole activity rests. From the first messengers on foot in ancient civilizations who, according to Herodotus, could be stopped by " neither snow nor rain nor heat nor gloom of night, to the fearless Dubrovnik messenger who had to walk for a month to reach Istanbul, and all the way to a reliable Austro-Hungarian postman with a full mail bag shown on this motif. Every news carrier was adorned with speed, accuracy, and reliability, the same features as postmen today.

A written message delivered to a messenger on horseback travelled significantly faster than a message carried by a messenger on foot. In cases of great haste, correspondence was marked “Cito, Cito, Citissime” (Latin for Fast, Fast, Fastest). A few centuries ago, a horseman in the service of the post office throughout Europe was called a postilion (from French postillion). He was adorned with an official postal uniform prescribed by special provisions, a specially shaped cap and high sturdy riding boots. A postilion was recognizable to everyone by the postal horn he wore slung over his shoulder and by which he announced his arrival at the destination as needed.

Mail coach for passengers, luggage and mail in Dalmatia, 1890s

The invention of horse-drawn vehicles made it possible to naturally connect the transport of goods and passengers with the transmission of news. The most important means of postal transport before the advent of the railway was a mail coach, mostly its fast version - a stagecoach. The guard of the mail coach, a postilion, took care of the safety of the passengers, but also the horses. He used a post horn to warn other coaches on the road to let the mail coach pass as well to signal its arrival at the post offices, which were evenly distributed along the main state roads for the needs of postal traffic.

Telegraph delivery man on a bicycle in Zagreb, 1930s

After being delivered from the World's Fair in Paris in 1867, the bicycle became extremely popular in Croatia, so it is not surprising that it was mentioned at the end of the 19th century as a new postal delivery vehicle. The original function of the postal two-wheeler was the delivery of urgent telegrams. This is evidenced by the telegram carrying case hung over the shoulder of this delivery man on a bicycle from the 1930s. The scene of the postman on a bicycle has thus become an everyday occurrence that evokes sympathy even today.

The motorization of postal transport in Croatia began in the 1910s, a decade after the first cars arrived in Croatia. Car transport has brought a new quality to postal traffic, especially when it comes to the speed and safety of transport of postal items, but also passengers. The modernization of the postal delivery service was later continued with the introduction of motorcycles alongside bicycles into delivery service. On a moped, like this one from the 1960s, the postman will deliver urgent mail for decades to come.