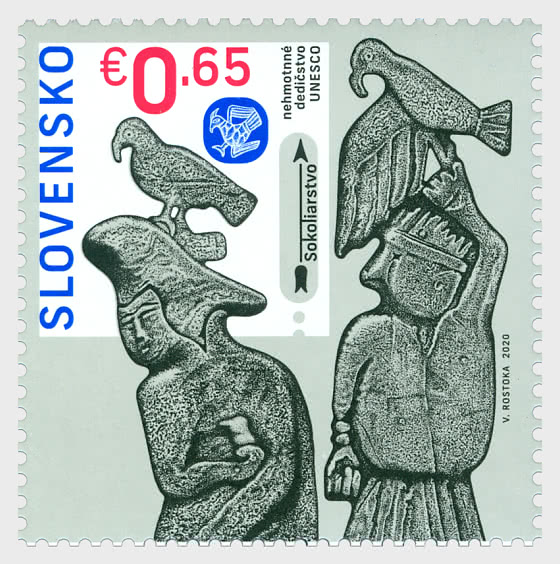 About Joint Issue with Mongolia: Falconry

This postage stamp, issued on the 70th anniversary of the establishment of diplomatic relations between Slovakia and Mongolia, depicts archaeological findings from the 8th century related to falconry. This specific way of hunting was popular with the Turkic aristocracy that lived in that period in Mongolia and also on territory of Slovakia. Falconry is the Mongolian national sport and from 2016 has been included in the UNESCO intangible cultural heritage lists. However, Slovakia has also been remarkably successful in international competitions devoted to falconry, which are usually dominated by Asian champions.
In 1891, the Russian scientist N. M. Jadrintsev discovered a stone monument, in the Bulgan Province in the Northern part of Mongolia, to the emperor of an unknown Turkic tribe – the Khagan Altan Thamgan Darkhan and his two sons, Torgul and Jelek, from the 8th century. The monument had been commissioned by a relative of the Khagan, Tekesh Kuli-Tudun, who was identified from an inscription engraved on the stela in Orkhon Turkic. It is an archaic script that the Turkic tribes derived from the Sogdian alphabet which is from the Eastern Iranian language group. The monument is exceptional as it bears a falcon in the right top section as a reference to the falconry of the Turkic tribes of the 8th century. The detail from the right hand section of the monument which is depicted in the postage stamp is supplemented by an analogous motif of an Avar falconer from the 8th century that was preserved on the reverse of a bronze belt fitting that was discovered in the residential area of the municipality of Moravský sv. Ján. This area was the westernmost part of the Avar Khaganate, which was established by a nomadic Turkic tribe from Central Asia in the 6th century.
Several historiographers, including Ján Steinhübel, assume that the westernmost territory of the Khaganate was managed by a Tudun who resided in the area of Devín Gate. Although we do not know his name, during the Avar campaigns led by Charlemagne at the end of the 8th century, as noted in the Royal Frankish Chronicles, the Tudun made use of a change in the political situation and was baptised in Aachen in 795.This helped him wrest power over a region, solely inhabited by Slavs, at the confluence of the Moravia and the Danube, from the Avars. This paved the way for the establishment of the independent Slavic state known as Great Moravia. In addition to taking power, the Moravian ruling elite also took over several Avar traditions, including falconry, as has been proven by several archaeological artefacts, in particular, a famous silver plaque that depicts a falconer from Staré Město-Špitálky as well as a metal button from the fortified hillfort, Pohansko near Břeclav, both presented on First day Cover.