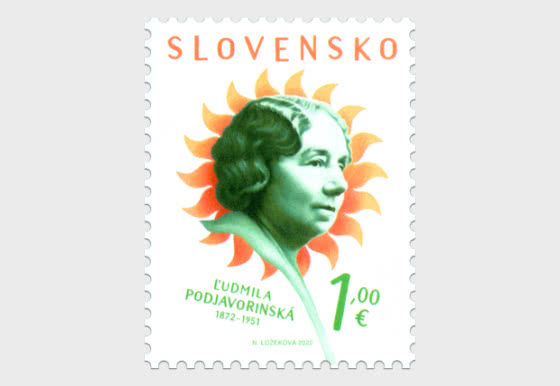 Ľudmila Podjavorinská, who was born Ľudmila Riznerová (26th April 1872, Horné Bzince – 2nd March 1951, Nové Mesto nad Váhom), was the first Slovak woman to publish a collection of poems. Her poetry juvenilia, from 1895, From the Spring of Life (Z vesny života), included intimate lyrical poetry about the emotional life of a young girl. Its melancholic and elegiac tone, combined with an emphasis on states of hopelessness, sadness, doubt, loneliness and abandonment, to a certain extent, foreshadows the topics and practices of Slovak poetic modernism from the turn of the 20th century. From her prose juvenilia, the short story Ondráš (1897) was met with great interest. The protagonist reminds us of Ondráš Machuľa, the leading character in Kukučín’s short story Unawakened (Neprebudený, 1866). The publication of the first Slovak magazine for women, Dennica, started in 1898, and she gradually became one of the core authors of the magazine. However, her opinions on women’s emancipation were rather traditional. She repeatedly thematised the issue of emotionality, the internal life of a woman and her family and social status. Examples include A Woman (Žena, 1909), a novella which is among her top epic works, together with other novellas such as Slavery (V otroctve, 1905) and Delusion (Blud, 1906). She also tried writing rhyming short stories After the Ball (Po bále, 1903); At the Ball (Na bále, 1905); Mirage (Prelud, 1915). She also created works for children; Ľudmila Podjavorinská is considered to be the founder of modern Slovak literature for children. She wrote short poems, rhyming jokes, ballads and also fairy tales. Her readers loved her stories that included animal characters such as The Cowardly Rabbit (Zajko-Bojko, 1930) and Čin-Čin (1943). Her novella The Lamb of God (Baránok Boží, 1927 published in 1932) contains a strong humanistic message. She created this work as a socio-Christian ballad about the inner world of an artistically gifted child. The most significant themes of her literary works included the effort for aesthetic and artistic expression, emotionality, an interest in social themes and the use of psychological tools.