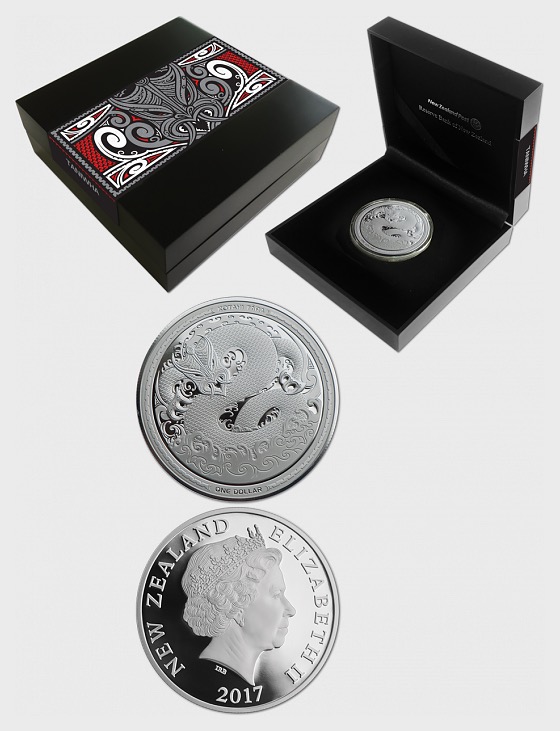 While other cultures have dragons, serpents or other mythical beasts as the root of their myths and legends, New Zealand has the taniwha. A dominant creature in many Māori legends, they were mainly said to live in water, favouring deep pools in lakes, or rough waters and rips in rivers and oceans. This powerful creature is the subject of this limited edition coin issue.

The exact characteristics of the taniwha changed and adapted with each legend told. Some were described as giant lizards or reptilian sea creatures, some even had wings. Some legends described them as shape shifters, able to change into a shark, whale or even a log if it so needed to. The purpose of the taniwha also varied greatly. Described as fierce protectors or kaitiaki of some tribes or iwi, they would be offered gifts in thanks for their protection. Yet by other tribes they were described as ferocious beasts that terrorised communities, kidnapping woman and capturing and consuming people. Despite being considered a supernatural creature they are still considered to be part of the natural environment in the Māori world.

Highlights
- Features the legendary taniwha in all its glory
- Designed by renowned New Zealand artist Dave Burke
- Limited to only 1,500 worldwide
- Minted from 0.999 silver
- Packaged in an elegant display case depicting a powerful taniwha

The ferocity and detailed characteristics of the taniwha have been beautifully illustrated by Dave Burke in this 1oz silver proof coin minted from 0.999 silver. This subject of many Māori myths and legends is portrayed emerging from turbulent waters which were said to be its favoured habitat. This unique $1 coin shines through with its detailed taniwha design, and features the denomination in both Māori and English. Each coin is accompanied by an individually numbered certificate of authenticity, and is packaged in an elegant display case featuring an intricate taniwha design. Hard to come by but sure to be appreciated, don’t delay in adding this piece to your collection.