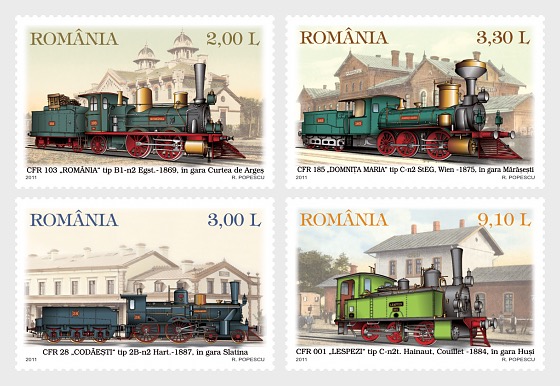 The railway technical adventure that will radically change the life of the inhabitants of this planet started in 1803 when Richard Trevithick (1771-1833), the Welsh engineer, built the first industrial steam engine in the world (“Tram-Engine”) in Coalbrookdale blacksmith’s shop. Within a short period of time, the one who registered his immortal name in the history of the steam engine (as “Father of the Locomotive Engine”) and of the worldwide railways was the Englishman George Stephenson (1781-1848), who for more than 10 years, between 1814-1825, was the main locomotive manufacturer, substantially contributing to their development.

In 1823, at Newcastle upon Tyne, George Stephenson, his son Robert, Edward Pease and Michael Longridge set up “Robert Stephenson & Company”, the first locomotive factory in the world. The first orders received in 1824 came from Hetton mines and Stockton & Darlington Railway company (“Locomotion No.1”, “Hope”, “Diligence” and “Black Diamond”).

The stamp with the face value of 2.00 Lei illustrates the CFR 103 “Romania” locomotive, type B1-n2 Egst.-1869, part of a representative series of 55 units, CFR 51-105, delivered in 1869 by the German locomotive factory “Dr. Strousberg, vormals Georg Egestorff, Linden vor Hannover” for the lines of CFR Shareholders’ Society. It was a locomotive for mixed trains and it had the diameter of the driving and coupling wheels of 1,425 mm and a maximum running speed of 70 km/h.

The stamp with the face value of 3.00 Lei illustrates the CFR 28 “Codaesti” locomotive, type 2B-n2 Hart.-1887, part of the series CFR 28-33 (6 units), delivered in 1887 by the German locomotive factory “Maschinenfabrik Richard Hartmann, Chemnitz”. It was a locomotive for express trains, used between 1887 and 1905 to tow the “Orient Express” trains on the route Varciorova - Turnu Severin - Balota - Pitesti - Bucuresti Nord (382 km). It had the diameter of the driving and coupling wheels of 1,906 mm and a maximum running speed of 115 km/h, being the first type of locomotive from the CFR fleet equipped with a leading bogie. Until the introduction, in 1913, of the first PACIFIC locomotives (series CFR 2201-2240, type 2C1-h4), they were the fastest locomotives within the CFR network.

The stamp with the face value of 9.10 Lei illustrates CFR 001 “Lespezi” tender-locomotive, type C-n2t Hainaut, Couillet -1884, part of the series of tender-locomotives for narrow rails (ec.1,000 mm) CFR 001-006, delivered in 1884 and 1887 by the Belgian locomotive factory “Société Anonyme des Usines Métallurgiques du Hainaut, Couillet”. It had the diameter of the driving and coupling wheels of 900 mm and a maximum running speed of 47 km/h.

On the postage stamp of the souvenir sheet of the issue, with the face value of 8.10 Lei we are shown the compound-locomotives CFR 8008 and CFR 8003, type 2C-n4v Bre.-1901, part of the series CFR 8.001-8.010, delivered in 10 units in between 1901 and 1902 by the Italian locomotive factory “Ing. Ernesto Breda & Co.-Stabilimento Meccanico, Milano”. Together with the tender of 3 axles, they had a gross weight of 100 tf. (ton-force) and, in order for them to run, all the railway bridges on the main routes were checked, reinforced and tested. The image on the souvenir sheet illustrates even the testing of a bridge, after it had been rebuilt, with two locomotives that together had 200 tf. They were compound-locomotives with four cylinders for express trains and they had the diameter of the driving and coupling wheels of 1,665 mm and a maximum running speed of 113 km/h being, distributed to the depots of Bucharest, Iasi and Ploiesti.