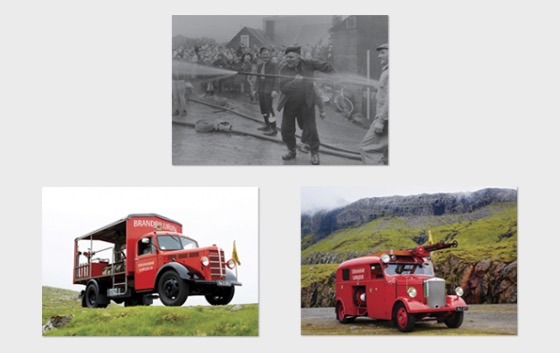 Fire is a Wonderful Friend but a Terrible Enemy

On February 22th, 2016, Posta will issue three stamps featuring a historic fire pump and two old fire engines. The fire pump, which dates back to 1776 and underwent repairs in Denmark in 1819, was the first of its kind in the Faroe Islands. The evolution of firefighting equipment has followed the development of Tórshavn as a city - the need for new firefighting equipment steadily increasing along with the growth of the city.

The inhabitants of Tórshavn numbered 984 in 1880. Most of them were living in the "Reyn" quarter of the town where the houses were huddled together, prompting extreme caution when people were dealing with fire. At the time population growth rate was high due to the influx of people from the rural areas to Torshavn. There were no fire hydrants, water pipelines being non-existent. In case of fire the fire pump was hauled to wherever the fire had broken out.

Water for the fire pump was retrieved from the sea or from rivers. Since the engine had no feed-pump, a human chain was formed and buckets of water passed along it from the shore or the river bank. In 1822 a fire station was built in the "Reyn" quarter, and at the same time firefighting equipment was purchased from the Royal Trade monopoly. All of these tools were moved in 1898 to the new engine house north of the old Municipal School by the town square.

An actual fire brigade, "Tórshavnar sløkkilið", did not come into being until 1933. At that time Tórshavn had approximately 3,000 inhabitants, and the town expanded steadily out from its centre. The fire pump was often a long way away from the shore - and rivers sometimes ran dry in summer. Therefore fire protection ponds were made in the rivers of "Rættará" and "Havnará". The first of these protective ponds was built by "Vaglið", the square in the centre of Tórshavn. Later on two ponds were made in "Havnará" opposite the city's theatre, where they can still be seen today.

It was a great event in the city’s history when the fire brigade got its first fire engine in 1948. It was a Bedford K truck, purchased in England, rigged as a fire truck with two motorized pumps. The truck was equipped with a 500m long hose and a 20m ladder. The truck accommodated ten fire-fighters and there was also room for firefighter uniforms and assorted firefighting equipment.

My thoughts now go back to my childhood years - the Bedford K fire truck and I are actually of the same age. Young people in those days were always alert when fire sirens started howling in the city. I remember that one siren was located on the roof of the Telephone House in the city centre, one on the Drying-house in Hvannasund and one out at Skansin. These sirens could be heard all over the city. Right away we, the young people living out by Landavegur, hurried up a large hill close by where we had a view of the entire city. First we looked for smoke, then we listened for fire engine’s siren whereupon we ran as quickly as we could down to the fire site.

When there was a fire, whether small or large, spectators always thronged in. The fire engines, sound of sirens and the fire itself affected us children, as did the sight of firefighters in their uniforms and helmets trying to gain control over the fire. Something about this chaos captivated us - and often people thronged so close to the site that they were a nuisance to the firemen.

Another fire truck arrived in 1962, this time from Denmark. It was a used truck, built in Denmark in 1937. To its great advantage this "Triangle" fire engine had a water-tank containing 1,500 litres. If the firefighters were not fighting a raging blaze, they usually managed to extinguish it using the truck's pressure pump before the conventional water hoses and pumps were in place.

These three stamps issued by Posta illustrate the history of the Tórshavn Fire Brigade, thus also outlining the development of the Faroese fire services. I am pleased that the staff at the Fire Station, which is now located in the old quarry at Oyggjarvegur, has preserved the two fire engines, and not least the original fire pump from the 1776.

The Bedford K fire engine has my keen interest, because I was a young motor mechanic apprentice at Vilhelm Nielsen who represented Bedford in the Faroe Islands. I knew several of the old firefighters, and remember one of them telling me that the Bedford fire engine was too small and powerless for the steep hills of Tórshavn.

There is a lot of water under the river bridges since the first water pump arrived in the Faroes in 1776. At that time a tenth of the population in the Faroes lived in Torshavn. Now as we enter 2016, Tórshavn Municipality includes the south of the Streymoy island along with Kollafjørður, and the islands of Nólsoy, Hestur and Koltur. Approximately 40% of the population lives in Tórshavn Municipality.

With the rapid growth of Tórshavn, its Fire Brigade has also evolved and is now equipped with similar equipment as the fire departments in our neighbouring countries. The fire service employs full-time firefighters and has, if and when the need arises, reserve personnel on call at a moment's notice.