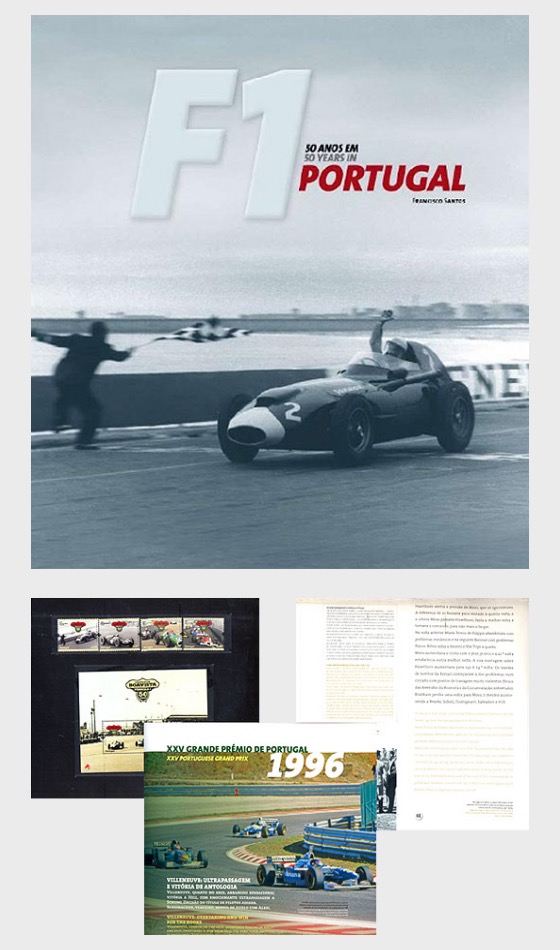 About F1 50 Years in Portugal Book

Although it is unknown to many, Portugal has a history replete with participation in car races at various levels, in particular Formula 1. The emblematic Grand Prix race was staged 16 times in Portugal, starting in Porto in 1958. Many of the veterans still recall the unusual incidents, the remarkable feats, the mythical pilots and other characters from motor racing that left imprints on the historical Boavista and Monsanto circuits and, more recently, on the Estoril Motor Racing Circuit.

The early stages of Portuguese presence in this sport, the many incidents and accidents that marked the events, the deeds and frustration, the laurels of victory and the disillusions of defeat - all this and much more is described in detail in this book that tells with journalistic liveness the more than fifty years of Formula 1 in Portugal.

Written by someone with an 'inside view' of the multiple impacts of a substantial part of this history, the book which s now published by the Portuguese Postal Services, CTT, also constitutes a valuable document for a more complete view of the sport and tourism in Portugal and for an illustrated understanding of Portuguese society in the second half of the 20th century.

But to many, this book will above all represent healthy reunion with a past, when high speed shows were experienced collectively and in black and white well-attended and exciting televised broadcasts.