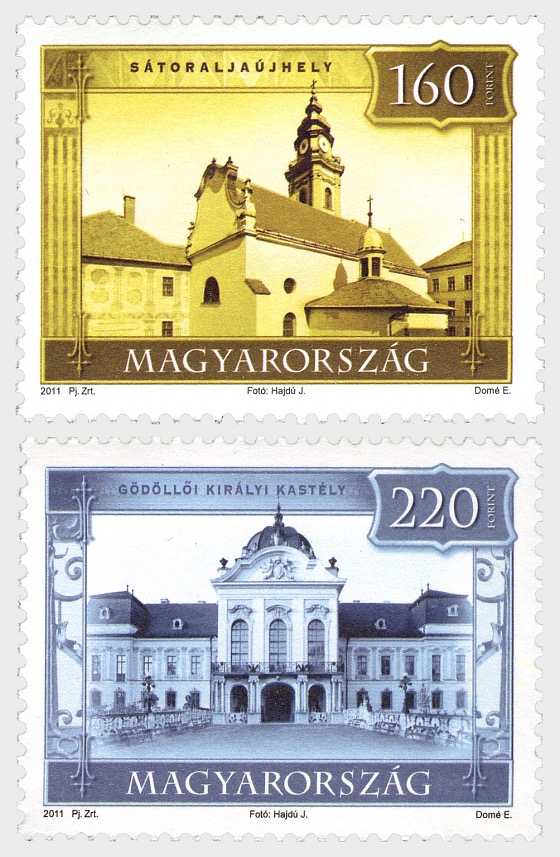 "The aim of Magyar Posta’s regular stamp series on Tourism is to present the sights of Hungarian cultural history. In 2011 the Pauline Piarist church in Sátoral-jaújhely and the Royal Palace of Gödöllő are shown on the stamps. Sátoraljaújhely, a town for 750 years , Sátoral-jaújhely in Borsod-Abaúj-Zemplén county is situated 82 km from Miskolc. It is named after the nearby Sátor Hill, and was originally known as Sátorhalom. According to the first records Alaptolma, the son of the chieftain Ketel and the forebear of the Cseszneky family, came to power in the area in 904, and later the estate passed into the hands of the Aba clan. In 1110 King Coloman the Book-lover gave the area to Count Rátold Casertai, who moved here from Apulia, and it was then devas-tated by the Mongol invasion. The survivors did not rebuild the settlement in the same place due to the constant danger posed by the frequent flooding of the rivers Bodrog and Ronyva. The new settlement was raised on the right bank of the Ronyva at the foot of Sátor Hill, hence the town’s present name, which liter-ally means new place at the foot of Sátor. The first writ-ten record of this is in a document made by Béla IV in 1256. Pauline monks settled here at this time in Barátszer, then a separate village and now the town’s oldest quarter. Sátoraljaújhely was granted the status of a town in 1261 by the “younger king” Stephen V, who ruled together with his father. It was at this time that the castle was built. Year of the Baroque 2011, Gödöllő , Gödöllő lies on the banks of the Rákos in the valley of the Gödöllő Hills in Pest county, 30 km to the north-east of Budapest. Its natural features and good geographical location make the town attractive. The surrounding forests have been the hunting grounds of aristocrats and kings for centu-ries. It is first mentioned in a document of 1349, when King Louis the Great endowed his childhood tutor, the courtier Péter Pohárnok, with Gödöllő and the lands and forests belonging to it. In 1868 the name Gödöllő was finally and officially settled upon. A major turning point in the life of the town was when Antal Grassalk-ovich (1694-1771) became the owner of the area. The nobleman chose Gödöllő as the centre of his extensive estates and thus opened the way to major development in the town. The imposing baroque palace, whose ar-chitecture and history are both important, was built here between 1744 and 1751. In 1751 Maria Theresa visited here. Antal Grassalkovich was a generous patron with good taste who employed outstanding architects and sculptors of the age. (Source: visegradgroup.eu , hu.wikipedia.org) "