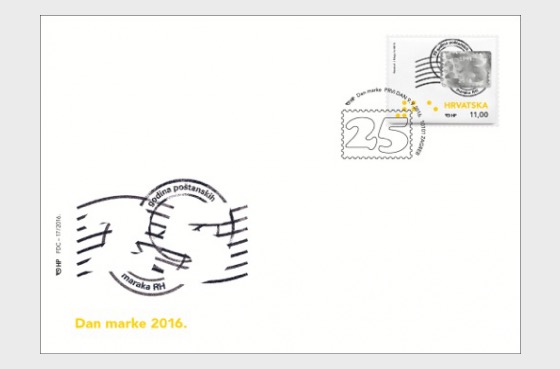 The Stamp Day - 25 Years - Postage Stamps of the Republic of Croatia - First Day Cover for only GBP £1.65

Stamp follows a course of the year and its various events and days; but one day is especially dedicated to the stamp itself, with a special issue which becomes a special event. On that day the stamp especially cherishes itself and treats itself as the motif. This year's Stamp Day reminds us of a round number anniversary - twenty-five years of issuing of this indication of a state. To this purpose the stamp represents its own “angle of viewing'', i.e. the angle at which we see it when it is affixed to a letter, together with the cancellation mark on it. This witty and beautiful design brings, however, also one unexpected novelty.

It is not difficult for the fans of Croatian postage stamps to await either beauty or novelties - since Croatian postage stamps are among the most beautiful in the world. This is not an expression of patriotic self-satisfaction, but the result of comparisons with the stamp produced in the world, but equally so, it is an expression of self-consciousness based on numerous international awards won by our hardly a quarter of a century old production. When one looks at that quantity, then one is proud not only of splendid visual design. Apart from modernism and clarity in design, Croatian stamps have also shown various technical innovations. This year's Stamp Day will be remembered just by one of them – a stamp produced as hologram.

Its central motif, the number 25, although entirely flat, has been printed as a nano gravure with a kinaesthetic three-dimensional effect and in the spectrum of rainbow colours. Numbers marking the anniversary, 1991-2016, appear three-dimensionally, depending on the angle of viewing. The background with postal horns with its real three-dimensional effect creates the feeling of deepness – which also changes in dependence on the angle of viewing. Slant lines which border the “stamp”, move and change colours in the same way. Such technological solution has been applied on a stamp for the first time in the world.

An old anecdote about a small piece of land says which it is not wide, but which it is deep. Isn't it beautiful that for this anniversary we have a stamp which is small, but deep and multiform?