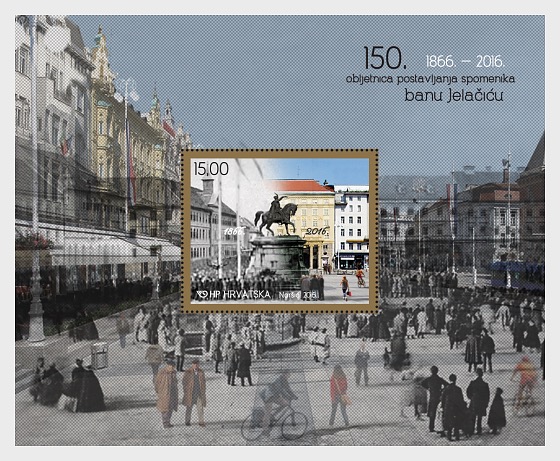 150th Anniversary of erecting the ban Jelacic statue - Miniature Sheet for only GBP £1.89

About 150th Anniversary of erecting the ban Jelacic statue

The statue of ban Josip Jelačić is placed on the main Zagreb square by the same name and it represents a recognizable landmark of Zagreb. Josip Jelačić (born on October 16th, 1801) a general and a Croatian ban from 1848, fought in battles defending the Habsburg Monarchy during the Hungarian Revolution of 1848, and he gained the status of a Croatian national hero by fighting against the Hungarian hegemony in Croatia. The first proposal for the erection of the statue of Josip Jelačić was made by the city mayor Janko Kamauf in 1854, when the title of 'count' was decreed to Josip Jelačić by Emperor Franz Joseph I of Austria but the difficulties in raising funds had postponed the erection of the statue. Ban Josip Jelačić died on May 20th, 1859. Soon after the death of the beloved ban, his successor, ban Josip Šokčević, ordered to the Committee for the erection of monuments and statues to open a tender for the statue and the chosen place for erecting it was the largest downtown square, which was named after Jelačić during his life. In a missive to the City Council, dated from November 25th, 1860, ban Šokčević gave detailed directives: to erect the statue on ban Jelačić Square, to be made of brass, for the base to be made of local granite, to sculpt the deceased while riding in the national attire and to award the accepted proposal of an artist with 500 forints. Two artists answered the tender: a sculptor from Rijeka, Vatroslav Donegani (1835-1899) and an Austrian artist, Anton Dominik Fernkorn (1813-1878). One of the most important artists of classicism in Vienna and the author of many equestrian statues, A. D. Fernkorn's proposal was chosen. To citizens of Zagreb he was known as the author of the statue of Mercury, the god of commerce, which he sculpted when he was 17 years old and which was placed in the house of Pavle Hatz in 1830 (today it adorns the facade of hotel Dubrovnik, which was constructed in place of Pavle Hatz's house in 1929). There are two more Fernkorn's statues in Zagreb: St. Mary Immaculate with four angels, which was bought by the municipal authorities of Zagreb in 1864 to be placed on the St Marko Square but it ended up in front of the cathedral in 1880 and St George slaying a dragon (1854) which was acquired by the archbishop of Zagreb, Juraj Haulik, for the park Jurjaves (Maksimir) and today it is on the Marshal Tito Square. Fernkorn signed the contract for the sculpting of the statue of ban Jelačić on October 22nd, 1861.