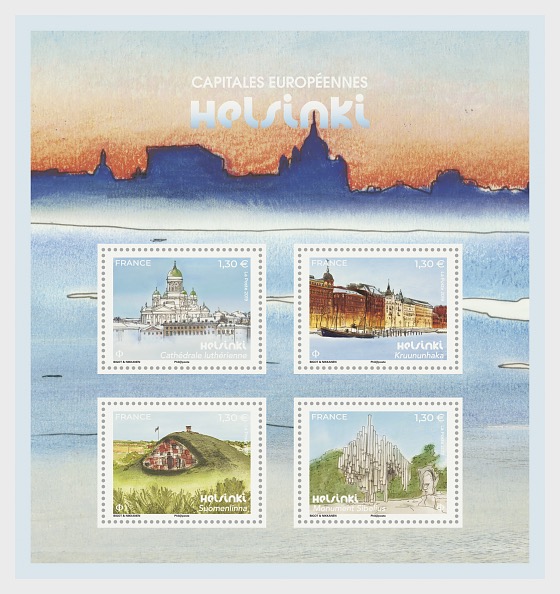 The city is spread over a peninsula and several islands, the presence of water is thus a strong feature of Helsinki, as reflected in the block; in the background the island of Katajanokka, on which we can see the silhouette of the Orthodox Church Ouspenski.

The Saint Nicholas Lutheran Cathedral, built between 1830 and 1852, stands on the Senate Square, a monumental complex with the aristocratic elegance of neoclassicism, the work of the town planner Ehenström and the architect Carl Ludvig Engel.

The Kruununhaka district is home to the Presidential Palace and the famous Senate Square. Pohjoisranta is the path that runs along the east side of the district, there are examples of Art Nouveau architecture, and in particular at No. 10 a beautiful building voted the favorite building of the inhabitants of Helsinki

Suomenlinna has been a UNESCO World Heritage Site since 1991. It is a collection of several islands connected together by bridges and footbridges. It is home to a fortress that has long played an important strategic role in the Baltic Sea and has been handed over to Swedes, Russians and Finns. Several houses that one imagines inhabited by Hobbits are on the island.

Sibelius Monument: Jean Sibelius (1865-1957) is the great musical figure of Finland, he is the composer of the symphonic poem Finlandia. In the middle of Sibelius Park, her bust is next to an imposing (1967) non-figurative sculpture by Eila Hiltunen: more than 600 steel tubes draw a giant organ and sing under the influence of wind.