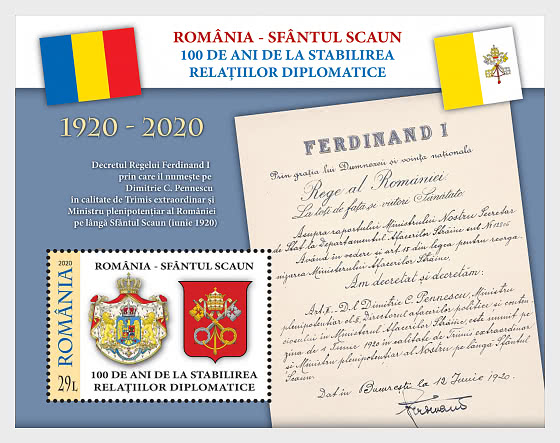 Romania - Holy See, 100 Years Since The Establishment of Diplomatic Relations - Miniature Sheet for only GBP £5.65

About Romania - Holy See, 100 Years Since The Establishment of Diplomatic Relations

In order to honour the Centenary of diplomatic relations with the Holy See, Romfilatelia introduces into circulation on Tuesday, May 5th, 2020, the postage stamps issue entitled Romania - Holy See, 100 Years since the Establishment of Diplomatic Relations.

The relations of Romanians with the Church of Rome date, through their Daco-Roman ancestors, from the first centuries of the Christian era. The early Christianization of the inhabitants of the Lower Danube area was done in Latin. Starting from the 11th - 13th centuries, Transylvania was included, through its elites, in the Latin (Catholic) environment, and Moldavia and Wallachia had, from the 14th century onwards, Catholic bishops with the Latin language of cult. The oldest Roman dioceses on the current territory of Romania were founded, starting from the 11th century, in Cenad, Oradea, Alba Iulia, in the region of the Curvature Carpathians, in Siret, in Arges, in Baia.

In the Middle Ages, all the important Romanian voivodes participated, during the Late Crusade, under the aegis of the Papacy, in the defence of the “Christian Republic”, namely, Europe. Some of them, such as Iancu of Hunedoara (John Hunyadi) and Stephen the Great, were called by the Holy Father “athletes of Christ”. In the same heroic century of the anti-Ottoman resistance, the Romanian hierarchs competed to unite the two churches (Western and Eastern), and the Metropolitan of Moldavia even signed the document of Florence, issued in 1439, which consecrated this fact. The relations between certain Romanian political authorities and the Holy See never ceased in the following centuries. They were accentuated, around 1700, after a part of the Transylvanian Romanians united with the Church of Rome, which resulted in the Romanian Church United with Rome (Greek Catholic Church). As a consequence of this act, starting from the second half of the 18th century, several generations of young Romanians studied in the Eternal Citadel and used their erudition to demonstrate the Latinity of the Romanian language and the Romanianness of the Romanian people, then becoming leaders of the movement for the national emancipation and achievement of the Romanian unitary national State.

In 1883, the Archdiocese of Bucharest was founded, and in the following year, the Diocese of Iasi. During the World War I, the Holy See was a supporter of the national desiderata of the Romanians, and at the end of 1918, recognized the Great National Assembly Decision of Alba Iulia and implicitly, the Great Union. In the years to come, the Holy See diplomatic corps was very active in the new States that emerged in Europe and was concerned with the recognition of the rights of Catholics.

Within the general trend, between Romania and the Holy See were inaugurated diplomatic relations at the level of legation (representation office) in June 1st, 1920. The first plenipotentiary minister of Romania attached to the Holy See was Dimitrie C. Pennescu, who came and appeared for duty on July 20th, 1920. The Holy See’s approval of his appointment was given three weeks after the publication of the royal decree in Bucharest, and the envoy from Holy See, Monsignor Francesco Marmaggi, came and appeared at Bucharest on October 17th of the same year.

At the same time, negotiations began for the elaboration of a treaty (Concordat) that would regulate all relations between Romania and the Holy See, and would establish the ecclesiastical organization of Catholic believers in Romania. The Concordat was signed on May 10th, 1927, in the Vatican City. The international treaty governing the relations between Romania and the Vatican, but also the status of Catholics of all rites, entered into force on May 29th, 1929, by the Parliament’s vote. As an element of novelty in the Catholic world, for the first time in a non-Catholic country, all episcopacies were nationally centralized, by subordination to the Archdiocese of Bucharest. On the other hand, the Concordat provided that the bishops were appointed by the Pope only with the consent of the Government in Bucharest, as they mandatorily had to be Romanian citizens.

In the following years, the relations between Romania and the Holy See evolved harmoniously, and in 1938 the Vatican Legation was elevated to the rank of embassy. But the outbreak of the World War II blocked this path. In 1940, the embassy became a legation again, and the rise of communism in Eastern Europe further limited relations with the Papacy. In 1946, the apostolic nuncio Andrea Cassulo was declared persona non grata, being replaced only the following year with Monsignor Gerard Patrick O’Hara, as chargé d’affaires. In July 1948, the Concordat was denounced by decree by the communist authorities. Two years later, in July 1950, the diplomatic relations with the Vatican were interrupted for 40 years.

In 1948, the communist government banned the Romanian Church United with Rome (Greek Catholic Church), some of its clergy, led by bishops, were imprisoned, and believers subjected to true persecution. The other Catholic churches, as well as the Orthodox Church, although not banned, carried out their activities with great difficulty.

Romania and the Holy See resumed their collaboration on May 15th, 1990, the new relations being characterised by cordiality at official level and normalization of the status of the Catholic Church in Romania, including by the re-establishment of the Greek Catholic Church. Presidents, prime ministers and other personalities of public life in Romania were received by the Holy Fathers, and, in their turn, Pope John Paul II, in 1999, and Pope Francis, in 2019, visited Romania.

On the perforated souvenir sheet, with a face value of Lei 29, there are the state coats of arms of Royal Romania and the Holy See, along with the Decree of King Ferdinand I appointing Dimitrie C. Pennescu as Extraordinary Envoy and Minister Plenipotentiary of Romania to the Holy See (June 1920).

The Apostolic Nunciature in Romania currently operates in the palace located 5-7, Painter Constantin Stahi Street. The edifice, illustrated on the First Day Cover, has been inaugurated in 1901, being commissioned by Franz Xaver von Hornstein, Archbishop of Bucharest in the period from 1896 to 1905.

The palace was designed by the Italian Giulio Magni, former chief architect of Bucharest, best known for the construction of the Trajan Hall. The palace erection was financed largely by Switzerland, the country of origin of the Archbishop von Hornstein, but also by a grant from King Carol I of Romania. Later, the building served as a Palace of the Archdiocese of Bucharest, and from 1922 it became the seat of the Apostolic Nunciature. In 1950, after the diplomatic relations with the Vatican were broken, it was seized by the State. The building was returned to the Catholic Church in 1990, and after the materialization of a consolidation and restoration project, it was reopened in November 1992, as the seat of the Apostolic Nunciature. During the visits to Romania, the Sovereign Pontiffs Pope John Paul II and Pope Francis chose to be accommodated in this palace.

Romfilatelia has fulfilled a beautiful duty by developing philatelic isues of authentic value dedicated to the great moments and personalities engaged in promoting the relations between Romania and the Holy See.

Romfilatelia thanks the Romanian Embassy attached to the Holy See, the Apostolic Nunciature in Romania and the Diplomatic Archive of the Romanian Ministry of Foreign Affairs, for the documentary and photographic support provided for the achievement of this postage stamps issue. Also, the documentary support provided by Mr. Emanuel Cosmovici, within the Bucharest “Annunciation Programs”, is appreciated.