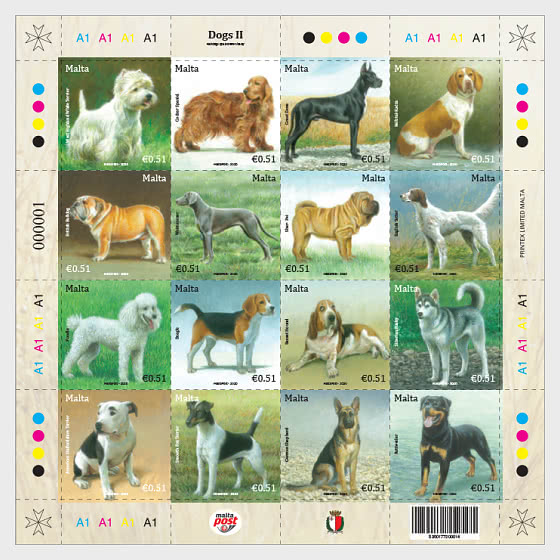 The dog is the most widely abundant terrestrial carnivore and the first species to be domesticated. It has been selectively bred over millennia and its long association with humans has led dogs to be uniquely attuned to human behavior. They perform many roles for humans, including companionship and more recently, aiding the disabled in therapeutic roles. Their influence on human society has given them the sobriquet of "man's best friend". This collection has been painted by local artist Andrew Micallef.

West Highland White Terrier
Commonly known as the Westie, this medium sized terrier is a Scottish breed. Intelligent and quick to learn, it is good with children but does not tolerate rough handling well. Westies are an energetic and boisterous breed, requiring regular daily exercise.

Cocker Spaniel
Spaniels are an old breed assumed to have originated in Spain. They were originally bred as hunting dogs in England and America - hence the term 'cocker' deriving from its ability to hunt woodcocks. Cocker Spaniels are intelligent and have a sweet disposition and are in their element when around people.

Great Dane
The Great Danes is a German dog known for its large size. Strong and elegant, with a powerful, well-formed, muscular, galloping body they were used for hunting boar and deer at princely courts. Their imposing appearance belies a friendly nature, often seeking physical affection with their owners. Like most dogs, when properly socialized they are gentle and loving.

Kelb tal-Kacca
This hound is indigenous to the Maltese Islands. The first record of this dog dates to 1773 when Grand Master Ximenes allowed its use for hunting. Its dappled beige and brown coat helps it blend into the Maltese countryside where it is most at home. Ever faithful and a
(still) reliable hunting dog, it is almost always seen at the heels of its owner.

British Bulldog
Bulldogs have a muscular, hefty body, a wrinkled face and a distinctive pushed-in nose. They are often associated with the UK with which they have a longstanding connection. They are one of the most popular purebreeds with a friendly, patient, if sometimes stubborn nature and have become popular family pets due to their tendency to form strong bonds with children.

Weimaraner
The Weimaraner is a large, energetic dog prized for its physical endurance and stamina. It was originally bred in Germany and used by royalty for hunting large game in the early 19th century, hence its strong, instinctive prey-drive. It requires frequent, vigorous exercise
and benefits from play but needs appropriate training to learn how to control its behavior.

Shar - Pei
With its deep wrinkles and blue-black tongue, the Shar Pei is one of the world's rare breeds. Originating from southern China, Shar Pei were initially bred as palace guards. They are independent, suspicious and reserved requiring early socialisation with children and strangers especially. Nevertheless, they can be devoted, loyal and affectionate.

English Setter
Setters are strong-willed, mischievous, gun-dogs bred for a mix of endurance and athleticism and still used to hunt small game. They have a lovely coat with long, silky fringes. Often known as "Gentlemen by Nature" they are indeed good natured and intensely friendly, people-oriented and well suited to families that can give them attention and activity.

Poodle
Poodles are known as highly intelligent, energetic and sociable dogs. They are ranked as the second most intelligent dog breed and as such are highly trainable, performing well at dog sports and agility. They love hiking and camping and are very comfortable in water.

Beagle
The beagle is a small hound developed for hunting hare. It has a great sense of smell and superior tracking instincts; making it an excellent detection dog for today's prohibited imports. Beagles have an even temper and a gentle disposition making them popular as
pets. However, they can be single-minded and determined making them hard to train.

Basset Hound
Like the Beagle, the Basset Hound was bred for hunting hare. Its sense of smell and ability to ground-scent is second only to the Bloodhound. Originally bred in France, Bassets are short legged (hence the word 'bas' meaning low) and famously devoted to tracking. They are friendly, outgoing and playful and tolerant of children and other pets.

Siberian Husky
The term 'husky' was first recorded in 1852 for dogs kept by Inuit people. They soon became popular as sled dogs used in Polar Regions and are most noted for their thick double coat as they are for their fast pulling-style. They are energetic and athletic and once retired are
kept as pets.

American Staffordshire Terrier
This medium-sized, short-coated dog also known as the AmStaff is described as being confident, smart and good natured. AmStaffs are well put together - agile and graceful despite their muscularity and keenly alive to their surroundings. They are known to be well
socialized, loyal and trustworthy and their courage 'proverbial'.

Smooth Fox Terrier
The Fox terrier originated in the 19th century from earlier varieties of British terriers. They are keen-eyed, lively, alert little dogs, exhibiting a lot of strength in a small packet. They are friendly and fearless boasting a ton of personality and are considered to be one of the best watchdogs on the planet.

German Shepherd
This breed originated in Germany in 1899 and is a medium to large-sized working dog used for herding sheep. They are strong, intelligent, very trainable and obedient and as such are the preferred breed for many types of work including disability assistance, search-and rescue, police and military roles and acting.

Rottweiler
Rottweilers are medium-to-large dogs originally bred to herd livestock. Today they are used in many parts of the world as search-and-rescue, guard and police dogs. They are generally good-natured and placid in disposition but require formal training and extensive
socialisation to control aggression associated with territorial instincts.