Centenary of the Faculties of Pharmacy - First Day Cover 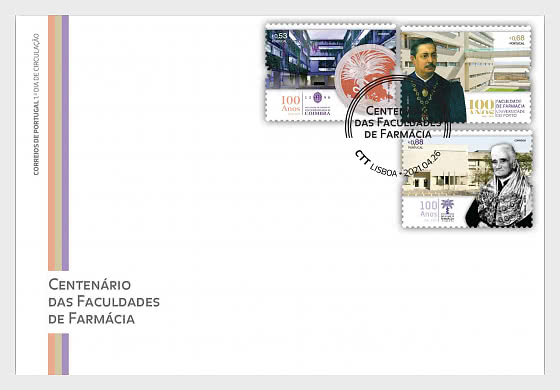 Centenary of the Faculties of Pharmacy - First Day Cover for only GBP £2.83

About Centenary of the Faculties of Pharmacy

Pharmaceutical teaching at the University of Coimbra dates back to the end of the 16th century in the reign of King Sebastião. The course was remodelled as part of the Pombaline reform of the university (1772), although it still did not award any academic degrees. In 1836, the University of Coimbra’s School of Pharmacy was established, operating in connection with the Faculty of Medicine. From that year, it was no longer possible to take the alternative route of the role of Chief Physician, which dated back to 1521, to obtain the professional title of pharmacist. In 1902, the pharmacy course was deemed to be of higher education level and the Faculty underwent a new and in-depth reform of its courses and of the institution itself. In 1911, the pharmacy course became autonomous from the Faculty of Medicine and, in 1918, the School of Pharmacy came to be called the Higher School of Pharmacy. These two reforms included adjustments to the study programmes and the structure of the school. In 1912, the School of Pharmacy was given its first facilities – Casa dos Melos – which opened in 1915. The work carried out by the School of Pharmacy was similar to that of any other Faculty, for which reason, in 1921, with the enacting of Decree no. 7,238, of 18 January, the School was elevated to the category of Faculty. The same year, Decree no. 7,668, of 13 August, approved its regulation. This document reorganised the Faculty and its study programme, turning a new page in the history of the oldest pharmaceutical institution of higher education in the country.