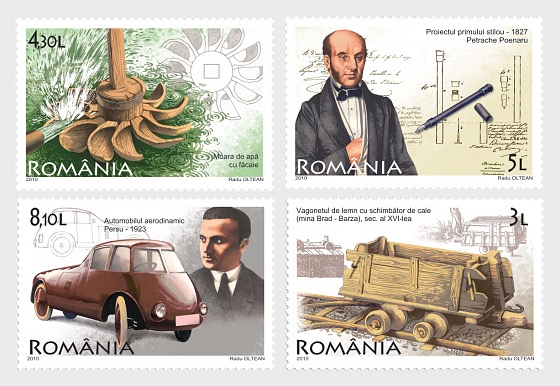 About Romania - World premieres (I)

The first series illustrates the following inventions: the horizontal wheel mill, the mining coach from Brad mine, the fountain pen and the aerodynamic automobile.

The horizontal wheel mill has been considered the “queen of the artisanal hydrotechnical installations” on the Romanian territory, whose use was mentioned ever since the 13th - 14th centuries. On a vertical axle there are ladle-shaped blades giving the system a supplementary force due to the appearance of a reactive jet. It was used in the areas where the water fallings had a low flow. Starting from the constructive principle of the “horizontal wheel mills”, the American engineer Lester Allen Pelton invented the turbine which bears his name. The original exemplars of the horizontal wheel mill may be seen at the Museum of Masterpieces of Science and Technology in Vienna and “Dimitrie Leonida” Technical Museum in Bucharest.

The wooden mining coach from Brad - Barza gold mine (16th century) has been considered as the first vehicle on rails to have a switch, in the history of technology. An original exemplar of this coach may be seen at the Museum of Transports in Berlin and a copy of it may be seen at the Railway Museum and “Dimitrie Leonida” Technical Museum in Bucharest.

The fountain pen is Petrache Poenaru’s invention, who, in 1827, obtained in Paris, the Patent no. 3208 for “the endless self-supplying ink pen”. The fountain pen invented by Poenaru insures the accuracy and continuity of writing. The creation of the pen opened the way for a fast development in the field of writing instruments used today all over the world.

Petrache Poenaru also stood out as a remarkable personality in our country’s history. As Nicolae Iorga said, Poenaru was, in 1821, the editor of Tudor Vladimirescu’s letters during the months when he was the “Peasants’ Ruler”. Besides the above mentioned invention, Poenaru also published the first printed geometry course in our country, translated the first algebra course and printed, together with Aaron Florian, the first French-Romanian dictionary in two volumes.

The aerodynamic automobile, invented by Aurel Persu, was patented in Berlin in 1922, under the name of “Automobile having an aerodynamic shape with four wheels mounted inside the aerodynamic coachwork” (German patent no. 402683, November 1922).

The engineer Aurel Persu, a specialist in airplanes’ aerodynamics and dynamics, was one of the first world specialists who studied adapting the aerodynamic shape to the automobiles. After many calculations and lab experiments, he reached the conclusion that a vehicle coachwork should be shaped as a falling water-drop. He built it between 1922 and 1923 in Berlin. Considering the diminished distance between the rear wheels, he gave up the differential system for the transmission of the engine torque. The drag coefficient for Persu’s automobile stood at around 0.28, compared to 0.8-1.0, the parameter registered in all