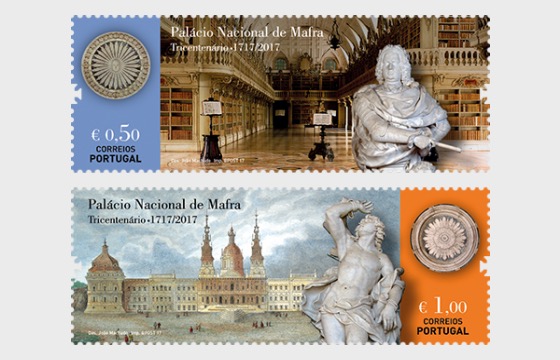 300 Years Beginning of Construction of the National Palace of Mafra - Set for only GBP £1.34

2017 is an important year for the National Palace of Mafra, as 17 November marks the tricentenary of the consecration ceremony and laying of the foundation stone of its basilica. No other Portuguese monument embodies what we might call a "total work of art" to quite such perfection, in its architecture, sculpture, painting, music, books and textiles. Here we nd a heritage site that comprises a wealth of genres, coherently arranged and commissioned with a critically astute eye, such that the palace, monastery, basilica and park all work as a single unit. This monument re ected the monarch’s wish to assert the power of a kingdom that was based on the riches of its colonial empire, namely the gold from Brazil. Indeed, over an area of around 40,000 m2, we nd a remarkable architectural plan, executed without interruptions or makeshift solutions. Quite the contrary, in fact: everything here is characterised by a level of quality that only the largesse of the second generation of Portuguese kings could command: excellent materials, bold solutions and nesse in execution. The complex contains di erent features linked by kilometres of corridors and over 150 stairways. The whole monument has been built with input from engineers, from the dome to the cellars. It was constructed by the very best in their eld, who in turn chose only the best for Mafra: those who contributed towards the construction of this estate include Ludovice and Custódio Vieira, who worked on the architecture, Francesco Trevisani and André Gonçalves, who were responsible for the painting, Wolkmar Machado and Domingos Sequeira for the mural paintings, Carlo Monaldi and Machado de Castro for the sculptures, and Witlockx and Levache for the carillons. This monument’s heritage is unrivalled by any other site and features an 18th-century hospital complex, two imposing 18th-century carillons, a (unique) set of six pipe organs and a historical library that many consider to be the most beautiful in the world. From the very outset, it has been a king’s palace, a queen’s palace, a Franciscan monastery, a basilica and a hunting ground. Commemorating it also means celebrating and paying tribute to it, and that is exactly what we intend to do three hundred years after the laying of the foundation stone. This issue of stamps is also a way of publicising the celebrations for the Tricentenary of the National Palace of Mafra to an international audience.