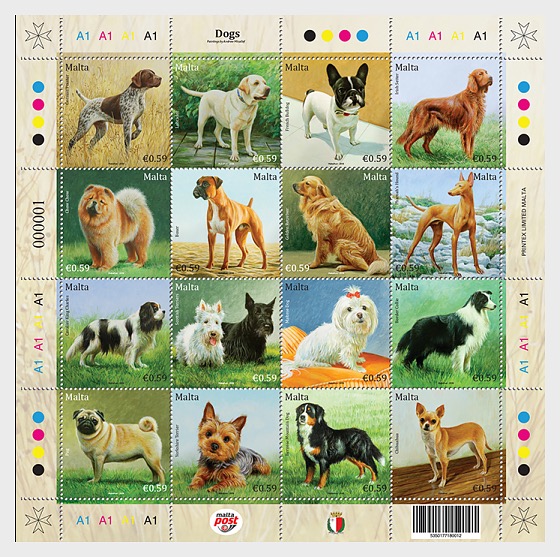 Ranking as the eleventh animal in the Chinese Zodiac, the dog is the symbol of loyalty, honesty and intelligence. The year 2018 is defined as the Year of the Dog. This collection of stamps features sixteen different dog breeds, painted by well-known artist Andrew Micallef.

Maltese Dog
The Maltese dog is reputed as one of the oldest dog breeds. Phoenician sailors visiting the island of Malta for trading, around 1500 B.C., are credited for discovering the first Maltese dogs. This elegant, lovable dog is famed for the silky white hair covering its body.

Pharaoh Hound
The Pharaoh Hound is one of the oldest known breeds of domestic dog and it is believed that Phoenician traders were the first to bring these dogs to the Maltese Islands. Known locally as 'Kelb tal-Fenek', this dog is very fond of running and hunting, but is also devoted to and protective of its human family.

Scottish Terrier
Developed in Scotland in the 1800s, the Scottish Terrier is part of the Terrier Group breed. This compact and energetic dog is especially known for its bearded muzzle and unique profile.

Border Collie
It is believed that the Border Collie may have developed from various sheepdogs used to protect flocks of grazing animals along the border of England and Scotland. The Border Collie features in many different colours and is characterised by its incredible agility, intelligence, obedience, and unwavering sense of loyalty to its master.

Labrador Retriever
The history of the Labrador Retriever began in the 19th century when the English aristocracy began to import them from Newfoundland. This remarkable dog has long been regarded as the most suitable family pet and makes an excellent working companion for various purposes. Labrador Retrievers are also successfully used as guide dogs for the blind.

Golden Retriever
The history of the Golden Retriever began in Scotland in the 19th century when several British gentry were developing a perfect hunting dog. Affectionate, obedient and extremely loyal to its human family, Golden Retrievers are also trained as guide dogs for the blind.

Boxer
Originating from Germany in the 1800s, the Boxer was originally used as a hunting companion, and over the centuries was selectively bred to become a search and rescue dog. The Boxer's high level of intellect and devotion to humans make this dog an excellent family pet.

Irish Setter
Bred as field hunting dogs in Ireland in the early 1700's, the Irish Setter has a naturally strong olfactory sense and superior hunting skills. This dog is today considered more popular as a pet.

French Bulldog
The French Bulldog has enjoyed a long history as a companion dog. Created in England to be a miniature Bulldog, it accompanied English lace makers to France, where it acquired its Frenchie moniker. Originally called the Bouledogue Français, it is loved for its sweet, lovable nature.

Pug
The Pug is an ancient breed with its origins in China. Apart from being one of the world's most physically distinctive dogs, the Pug is also well loved for its charismatic personality and charm.

Chihuahua
The Chihuahua breed was discovered in the Mexican state of Chihuahua and is known for being the smallest dog breed in the world. This breed has a varied temperament, and while it is reserved towards strangers, it has an extreme devotion to its master.

Yorkshire Terrier
Developed in England in the mid-19th century, the Yorkshire Terrier is a miniature dog breed. The trademark of this breed is its coat colour: a clear shade of tan with a dark steel blue hue. Yorkshire Terriers are small in stature but have a large personality with love for adventure.

Bernese Mountain Dog
Originated as a farm dog, the Bernese Mountain Dog comes from the canton of Bern, hence its name, and is famous for being the only Swiss mountain dog with a silky, long coat. It is a large sturdy dog breed, with a friendly and calm disposition.

Chow Chow
This breed was introduced to England in the late 18th century and was given the Chinese name Chow Chow. Known as the "Wild Dog of China", the Chow Chow is a breed with a scowling expression and a unique black tongue. This dog can be stubborn and independent but is also devoted and protective of its human family