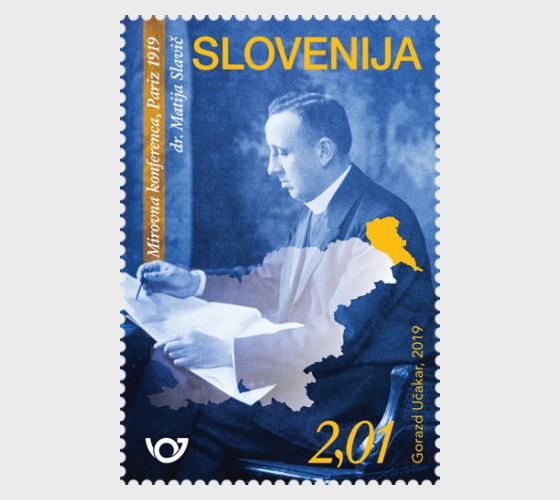 Centenary of the Unification of Prekmurje with the Rest of Slovenia - Set for only GBP £1.91

The Slovene inhabitants of Prekmurje, the region extending along the left bank of the Kučnica stream and the river Mura as far as the present-day borders with Austria, Hungary and Croatia, had been part of the Kingdom of Hungary since the end of the eleventh century. Right up until the end of the First World War, they were politically, economically and culturally separate from the other Slovenes.

Because of their concentrated and compact settlement of the area from the river Raba/Rába to the villages above the town of Lendava/Lendva, the upper part of this area had been officially known as the Slovene March (or, in Hungarian, Tótság) since the end of the Middle Ages. The name Prekmurje (literally "Land over the Mura" or "Transmurania") and the demonym "Prekmurian Slovenes" did not establish themselves in Slovenia until after 1919, since only then did the rest of the country become fully aware that there were also Slovenes living "over the Mura", until then the national border. For their part, the Prekmurians were already defining themselves as Slovenes in the early nineteenth century.

With the establishment of the dual monarchy of Austria-Hungary in 1867, the Slovenes of Prekmurje were faced with increasing pressures and attempts at Magyarisation resulting from a politically motivated desire to transform this multi-ethnic country into a single Hungarian nation. The worst effects of this policy were felt in schools and public institutions. Yet Slovene consciousness continued to strengthen among the people of the area in the period leading up to the end of the First World War, encouraged above all by the actions of the local Catholic clergy. This consciousness was clearly expressed in the months following the end of hostilities, when the future of the area was among the issues decided at the Paris Peace Conference: both Hungary and the new Kingdom of Serbs, Croats and Slovenes (later the Kingdom of Yugoslavia) claimed the entire area for themselves. The uncertainty came to an end with a final decision on 9 July 1919. On 12 August 1919 the army of the Kingdom of Serbs, Croats and Slovenes occupied the whole of Prekmurje. A week later, at a great public assembly in Beltinci, it handed power over to the civilian administration. In memory of this decision, and in particular of the assembly, the Republic of Slovenia celebrates 17 August as a national holiday marking the date on which the Slovenes of Prekmurje were united with the mother nation.