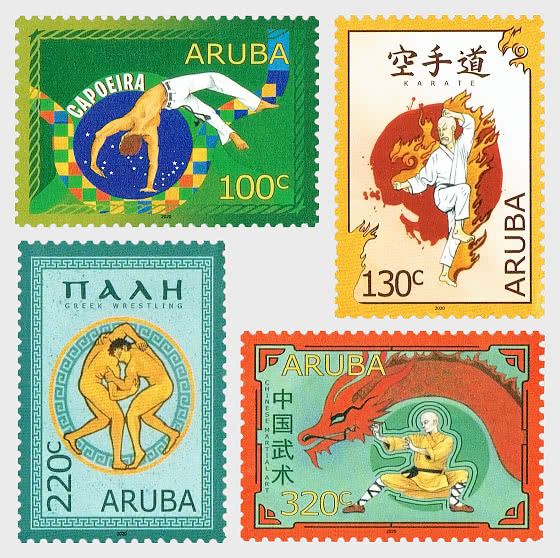 100 cent:
Capoeira is an Afro-Brazilian martial art that combines elements of dance, acrobatics, and music. It was developed by enslaved Africans in Brazil at the beginning of the 16th century. It is known for its acrobatic and complex manoeuvres, often involving hands on the ground and inverted kicks.

Capoeira was widespread prohibited, but that didn’t stop the Capoeristas. They camouflaged the martial art in a form of dance. And by half the 20th century, Capoeristas began traveling outside of Brazil and bringing Capoeira to the rest of the world. On November 26, 2014, Capoeira was granted a special protected status as intangible cultural heritage by UNESCO. It’s recognized that the "Capoeira circle is a place where knowledge and skills are learned by observation and imitation" and that it "promotes social integration and the memory of resistance to historical oppression". The roda is a circle formed by Capoeiristas and lined around with Capoeira musical instruments. Two Capoeiristas enter the roda and play the game to the style required by the musical rhythm. Music is important in Capoeira. It sets the tempo and style of the game that is to be played within the roda. The music is formed by instruments and singing and is controlled rhythmically by a typical instrument called berimbau, from slow to fast, depending on the style of the roda. Today it is practiced all over the world, traditionally and competitively in groups, events, institutions and competitions. Today in Aruba there are several Capoeira martial art clubs.

130 cent:
Karate, a martial art originating from Okinawa island in Japan, is a predominantly, striking martial art style. Influenced by a Chinese Kung Fu style, that developed for centuries, only to become popular in the early 20th Century by migration to Tokyo.
After WWII, Okinawa was a military base for the US and Karate was popular among servicemen. The influence of movies from the 60’s and 70’s helped popularize the martial art greatly, and embedded Karate in modern pop culture in TV show, movies, etc. Popularity of Karate is widespread. You can find a dojo in almost every country around the world. Karate can be practiced as an art (budō), self defense or as a combat sport.
Karate training is commonly divided into kihon (basics or fundamentals), kata (forms), and kumite (sparring). The World Karate Federation claims there are 100 million practitioners around the world, making it a very popular martial art. Aruba has many Karate Dojo’s or clubs that practice and participate in Local and International Competitions.

220 cent:
Greek Wrestling, also known as Ancient Greek wrestling and Palé, was the most popular organized sport in Ancient Greece. A point was scored when one player touched the ground with his back, hip or shoulder, or conceding defeat due to a submission-hold or was forced out of the wrestling-area.

This ancient Greek Wrestling competition was also added to the Olympic Games in 708 BCE (Before the Common Era) Wrestling was taught and practiced in a building called the palaestra.
Other sports were taught and practiced in gymnasiums.
Greek athletes were the few athletes in the ancient world who practiced and competed in the nude. No one knows exactly the reason why. Now wrestling is still being practiced in modern day and grew in different styles, and has influenced many other martial arts and is part of combat training.
From an Olympic sport to professional wrestling in entertainment, as an American style wrestling show on TV or Lucha Libre style from Mexico. And with the popularity of MMA, mixed martial arts, wrestling is considered as one of the key disciplines for MMA together with other martial arts.

320 cent:
Chinese Martial Art often named under the umbrella terms kung fu, kuoshu or wushu, are several hundred fighting styles that have developed over the centuries in China. These fighting styles are often classified according to common traits, identified as "families", "sects" or "schools" of martial arts. Various sports originated chiefly in Japan, Korea, and China.
Martial arts are codified systems and traditions of combat practiced for a number of reasons such as self-defense; military and law enforcement applications; competition; physical, mental, and spiritual development; entertainment; and the preservation of a nation's intangible cultural heritage
Kung Fu – this Chinese martial art has ten styles. These often have the name of animals, such as Monkey Kung Fu and Praying Mantis Kung Fu.

China has a long history of martial arts traditions that includes hundreds of different styles. Many distinctive styles have been developed, each with its own set of techniques and ideas. There are styles that mimic movements from animals and others that gather inspiration from various Chinese philosophies, myths and legends, even though, forms in Chinese martial arts are intended to depict realistic martial techniques. Many forms have been elaborated upon, to provide better combat preparedness and or to look more aesthetically pleasing.
In Aruba there are various groups or clubs that practice Chinese Martial Art.
Tai Chi – known as the “gentle martial art” because you practice techniques in slow motion
is popular here and practiced by many mostly for its health benefits.
And to this day Chinese Martial Arts are used in entertainment industry and the influences in movies and TV shows are vivid in all countries around the world.