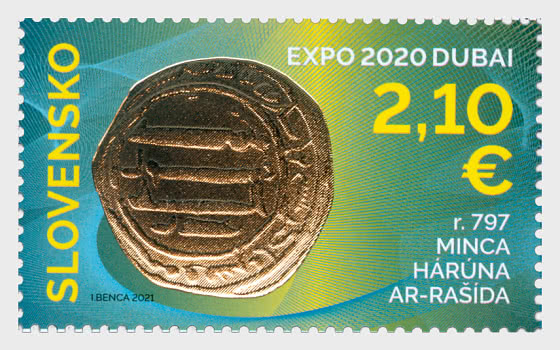 The EXPO 2020 Dubai World Exhibition, that was intended to take place in 2020, has been postponed to 1st October 2021 as a result of the global COVID-19 pandemic. It is intended to showcase our futuristic future. As a nod to the presentation of new technologies, Slovenská pošta, a. s. decided to support the participation of Slovakia in the global exhibition, which is being held in an Arabic country for the first time, through the issue of a new stamp printed using a new unique technology, a nano-relief embossing. The motif of the postage stamp is the reverse of a valuable Arabic coin from the collection of the Institute of Archaeology at the Slovak Academy of Sciences in Nitra which demonstrates aspect of mobility declared among the main themes of world exhibition A renowned Slovak numismatic and a long-standing employee of the Institute of Archaeology at the Slovak Academy of Sciences PhDr. Ján Hunka participated in its selection. Sadly he died on 8th February 2021 as a consequence of infection with COVID-19. As a tribute to him, we provide the full wording of his text: “Seventeen-millimetres in diameter and 3,364 g in weight, a copper fals of Harun al-Rashid, Caliph of Baghdad (763-809). It was found on 8th April 1992 by I. Žundálek and M. Soják during their survey of the southern slope of the hill beneath the Bratislava Castle. The typology of the coin was determined by V. Suchý from Bratislava and its originality was verified by V. Novák of the Náprstek Museum, Prague. According to their analyses, this coin was made in an unknown mint in the Hijri year of 181, by the Gregorian calendar AD 797. This coin is the oldest Slovak monument that proves there were mutual contacts with traders and merchants that had passed through Arabic lands. It underlines the political and economic significance of Slavic Bratislava, an important trading centre on the Danube at the turn of the 8th and 9th centuries. It is probably one of the few pieces of evidence that proves the existence of long-distance trade routes between the Caliphate of Baghdad and Francia during the reign of Charles the Great (768-814) and Harun al-Rashid. It is an exceptional finding on the area of the Carpathian Basin, as only three findings have been reported over this entire area, including a total of twelve golden dinars and silver dirhems from the 8th century”. (See in: Zborník SNM Archeológia (The Journal of Archaeology of the SNM), Supplementum 2. Bratislava 2007, pp. 153–158.) Relics from the palace of Harun al-Rashid in Raqqa, Syria, where Harun al-Rashid moved the capital of the Caliphate in 796, are portrayed on the FDC surcharge. A drachma bearing a portrait of Harun al-Rashid made by the Zarjan mint between 775 and 809 is the motif of the FDC cancellation.