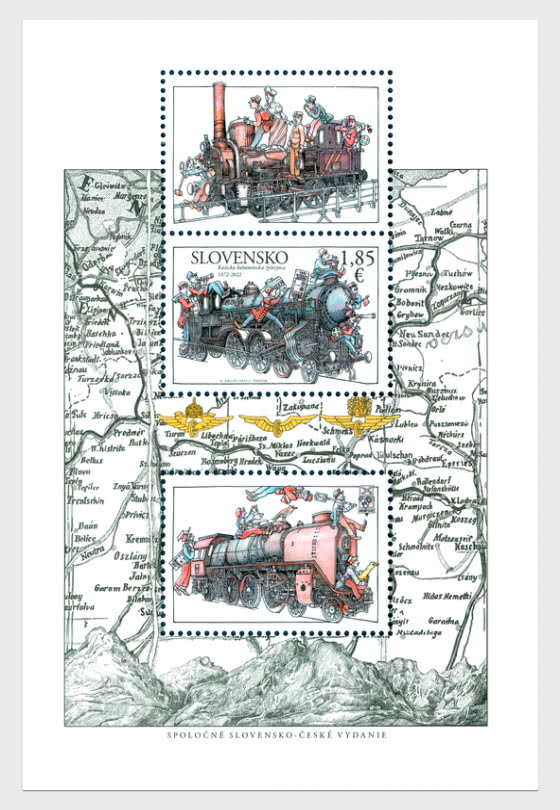 2022 Slovakia - Czech Republic Joint Issue - The 150th Anniv. of Putting the Kosice–Bohumin Railway into Operation - Miniature Sheet for only GBP £1.70

About Slovakia - Czech Republic Joint Issue - The 150th Anniv. of Putting the Kosice–Bohumin Railway into Operation

The Košice–Bohumín Railway track is still among the main arteries within the Slovak railway network. The history of this route dates back to as early as the 19th century when the only railway lines within the Kingdom of Hungary were the steam-powered Vienna–Pest–Debrecen railway and the horse-drawn Bratislava–Trnava railway. Thus, there was virtually no railway service within the whole of Upper Hungary. Not only Hungarian entrepreneurs and intellectuals, but also, as a result of their pressure, a substantial proportion of politicians were aware of the seriousness of the situation. As early as 1839 the Diet of Hungary debated Act No. XXV/1836, which may be considered to be the foundations of Hungarian traffic policy. Later, it gave rise to Act No. XXX/1848 which ordered the construction of thirteen railway tracks. However, even this act had no substantial impact on the construction of the necessary rail connections. In the mid-19th century, the management of the Ťřinec ironworks, owned by Archduke Albrecht, a member of the imperial family, began to discuss the construction of a track that would connect Silesia via Jablunkov, Žilina, Liptovský Mikuláš, Poprad, Spišská Nová Ves, and Košice. The first real design to be implemented dates back to 1864. Its goal was to meet the requirements of the Silesian ironworks. The railway was intended to speed up the transport of iron ore from deposits in Spiš and Gemer to the Třinec ironworks, to make it more effective. It was also expected to provide the same benefits to the transportation of coal from the Silesian mines to northern and eastern Hungary. Other arguments for the railway included the transport of wood, cattle and agricultural products and last but not least, the railway was intended to improve transport links to Slovak spas and the High Tatras. The initial works finally began on 15th October 1867. However, the construction was suspended or postponed several times due to financial problems. The situation finally improved with the involvement of a new investor, the Anglo-Austrian Bank. Only then did the track construction properly get off the ground. The Košice–Kysak–Prešov section was completed first and put into operation on 1st September 1870. Further sections followed in 1871, and the last section, Spišská Nová Ves – Kysak, was put into service on 12th March 1972. The entire line from Bohuním to Košice went into regular operation, with a single pair of mixed trains, on 18th March 1872. The motif of the postage stamp is a steam machine with a conically terminated boiler series Ip. Košice-Bohumín Railway ordered 18 modified machines series 110 from Imperial Royal Austrian State Railways for purposes of transport heavy express trains in 1908 – 1912.