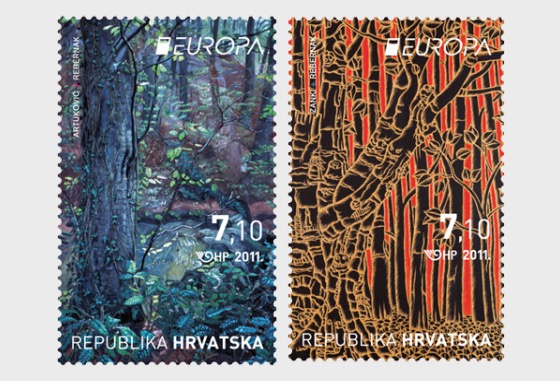 Forests are lungs of the whole world: green which produces blue which creates oxygen around our glittering ball in space. This small ball, like perpetuum mobile, i.e. the pre-model of the idea about it, holds the whole life known to us in our measurement units - all in-breaths and out-breaths, all breathing and sighs, all building and upgrading. Just for this reason forests are not only biological reserves and the destruction of Amazon is not just an environmental problem. Especially for Europe, forests are a constitutive cultural fact. They sing eternally. They are selva morale, that inevitable place of choosing directions, the place whereto medieval Bovo took his beloved: “Through the leafy forest, Bovo went a-riding, and his pretty Merswind trotted on beside him”. Forest is that land into which Tristan and Isolde are willingly expelled, where they experience happiness and reconsideration of their love. The forest is what exchanges meaning with the pillars of cathedrals. It is a dark background for crumbs and small stones left behind by Hansel and Gretel; it is a soil of memory preserving a thought about returning home. Forest has its own consciousness and subconsciousness, according to the lesson by Maurice Maeterlinck. Forest is a matter of constant choice, Holzwege, (wood-ways) as one of the most important philosophers of the 20th century would say. Forest is finally that space of (political, social) standpoint (for Green Cadre), the choice confirmed in saying „He went into the forest", meaning that he took his portion of active freedom; or it is maybe the good wish from the syntagma „God turned you toward the forest". Forest is a place where meeting one’s own self is inevitable where final choices are made: it is the Stribor’s Forest by Ivana Brlić Mažuranić. Once, deforestation implied progress of civilisation: "deforestation, protection”. This can be shifted in time and we can say: „deforestation, Strossmayer Gallery“. Today deforestation means the death of a family tree. With forest there dies the uncertain, the ungranted, the courage for life and death, the human. With geography there dies history. Thus, if Europe wants to preserve its identity, may the God turn it toward the forest. May he spare the forest from sour rains; and Croatia can help Europe in this aspect, since - preserved through poverty, it can still wish someone a welcome and a happy stay. Having in mind not only physical but also metaphysical value of forests for European culture, Croatian Post has chosen a conveyed depiction of that conveyed sense. Thus is the forest presented in works of two painters: Lovro Artuković and Josip Zanki. Josip Zanki was born in Zadar in 1969, graduated from the Academy of Fine Arts in Zagreb in the class of professor Miroslav Šutej, and is today an assistant professor at the University of his native Zadar. His forests are to great extent inspired by a typical landscape of Velebit; they transform a real world into stylised codes of collective memory. Lovro Artuković, born in 1959, graduated from the Graphic Department of the Academy of Fine Arts in Zagreb, now living in Berlin, brings into scenes– like he uses to say - semblance. He measures his own existence with collective memory, mutually transforming both. His forest has been painted as fully mymethic masterpiece of old painting, but it is only a subject in expectation – as Artuković would say - “awaiting a story“. Thus have two Croatian painters - deep beneath the surface of the seen, painted the relationship of Europe and forests today. Željka Čorak