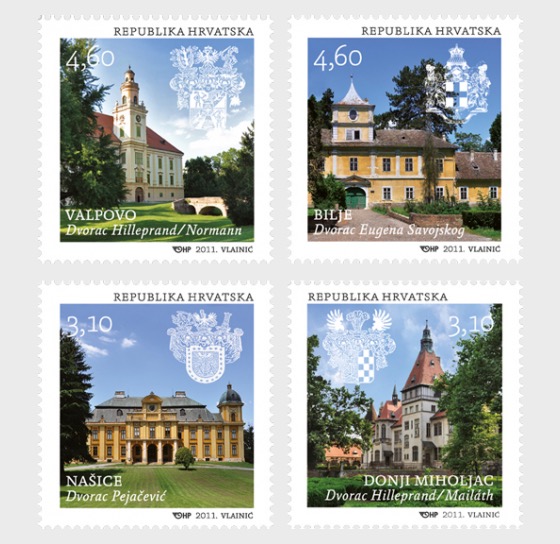 About Castles of Croatia

Donji Miholjac – the Hilleprand-Mailáth Castle There are two castles in Donji Miholjac, one next to the other. The older one is a ground floor, long, late-baroque building from 1818 and the newer one is one storey historicist building of picturesque facades built between 1905 and 1914 according to the project of the Budapest architect István Möhler. The old castle is a modest building, 82 meters long and 9 meters wide. It included also several outbuildings. The new castle, built next to the old, is among the last Slavonic castles and among just a few built in Slavonia at the beginning of the 20th century. The ground-plan size of the castle is 44x20 meters. The castle has neoromanesque characteristics of the English Tudor Style. Also numerous stork’s nests on chimneys, apart from all other things, remind one of the castles from children’s picture-books or cartoon movies by Disney. Such look and a good preservation of the castle classify it among the most picturesque in Croatia. Donji Miholjac is situated northwest from Osijek, five kilometres from the river Drava and the border with Hungary. Newer history of Donji Miholjac is connected with the nobleman’s estate of the baron family Hilleprandt von Prandau, with the seat in nearby Valpovo. The Austrian emperor and Croatian king Karl VI, father of Maria Teresia, donated 1721 to Peter Antun baron Hilleprand (1676 – 1737) the estate of Valpovo with about forty settlements, among which was also Donji Miholjac. In the next 110 years Donji Miholjac will be part of the great noble estate of Valpovo. The estate Donji Miholjac dates from 1831 when the great Valpovo estate - formed after the death of Josip Ignac baron Hilleprandt von Prandau (1749 – 1816), split in two parts, for the two Joseph’s sons: Gustav (1807– 1885) who gets the south part with the seat in Valpovo and Karl (1792 – 1865) who gets the north part with the seat in Donji Miholjac. Later the Gustav’s daughter Stefanija, married to Georg, earl of Mailáth von Székhely inherits Donji Miholjac. The new castle was built by the family Mailáth, whose descendents live today in Hungary. They originate from Transilvania, they owned castles Perbenyik Zavar in Slovakia and Gordany in Hungary and were given Hungarian earl title in 1885. Ladislav, the son of Stefanija and Georg (1862 – 1927) was the last owner of the castle; he sold the estate in 1923 to the business company «Podravina». Ladislav was close with the Austrian hair to the throne, Franz Ferdinand, who frequently visited Donji Miholjac. Last time he was there for hunt, three months before his assassination in Sarajevo in 1914. The castles are surrounded by vast landscape gardens and are protected as a monument of park architecture. The new castle was erected in the first half of the 19th century, next to the old castle and at the end of the 19th and the beginning of the 20th century was enlarged and partly reshaped. In the gardens there grow about hundred sorts of trees and bushes, about twenty sorts of conifers and the majority of broad-leaved treas. By its age and a magnificent look especially impressive is Pterocaria (Caucasian Wingnut) as well as the marsh cypresses. From sometimes numerous park constructions there remain preserved to our days - though in a very bad condition - the octagonal pavilion, three decorative gardens between the pavilion and the castle terrace, a greenhouse (orangerie) and a part of the built fence of the park. By its town-forming power the park strongly influences the prospect of the community and contributes to its uniqueness, together with the castle dominating by its size the small town and the plain landscape.