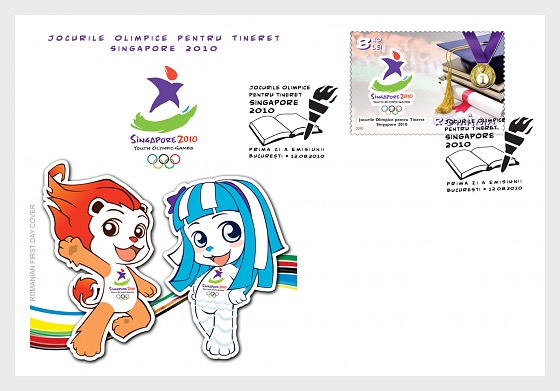 On the occasion of the first edition of Singapore Youth Olympic Games, Romfilatelia introduces into circulation a postage stamp that brings great joy not only to philatelists, but to the sports fans alike.

On July 2007, at the 119th session of the International Olympic Committee, held in Guatemala, the IOC President, Jacques Rogge, presented the Youth Olympic Games project, dedicated to the teenaged athletes between the ages of 14 and 18.

The competition would have a summer and also a winter edition, with the summer version lasting last twelve days, while the winter version lasting ten days; they would alternate every two years, exactly as the classical Olympic Games.

It is estimated that almost 5000 athletes, from more than 200 countries, competing in
26 sports events, will participate at the Youth Olympic Games (YOG), taking place from 14 to 26 August.

The Youth Olympic Games Opening and Closing Ceremonies will be staged at The Float@Marina Bay, from Singapore, which is also the world’s largest floating platform.

The sports contests will promote durable values, the same as the traditional Olympic Games: perfection, friendship and respect. Young athletes of the world will compete in the spirit of those values hoping to be the future Olympic laureates and prominent citizens of the world community.

Our thoughts will be with Romania’s young hopefuls for which we truly nourish the wishes of success and as many victories as possible, thus honoring the Romanian flag.