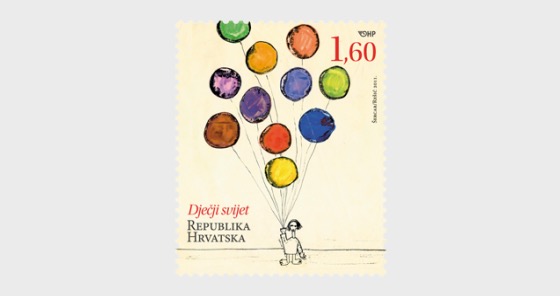 International Children's Festival in Sibenik - Set for only GBP £0.19

About International Children's Festival in Sibenik

Stamp motif: Child with multicolour balloons Pendant motif: Festival’s title in two languages and festival’s logotype in the shape of Putto, the trumpeter This issue is dedicated to the International Children’s Festival in Šibenik, held for the first time in1958, which became an important multimedia cultural manifestation with international character and a kind of review of the best production for children, as well as the best creations by children themselves. A stimulus for play, an invocation of joy! International Children’s Festival in Šibenik has reached half-a-century of age and has entered into its 51st year of existence! Founded in 1958, in its beginnings it was organised randomly– in the way children usually do things – sometimes yes and sometimes no! It kept changing its name (First Festival of the Child, Festival of the Child Šibenik, Yugoslav Child Festival, International Child Festival), testing concepts, wandering and inquiring all around with the goal to show to anyone - during its 15 days of duration, from the middle of June to the beginning of July - all the good and valuable in productions for children and creations by children themselves. In which way the festival ran all these years, and what was actually happening, tell us monographies, movie documents, radio and television programs, various chronicles, notices, reviews, bulletins… presenting compliments and thanks to all those who supported and maintained the festival with their wits, joy, all kinds of knowledge and benevolence, promoting Šibenik into a town of play, opposing to any kind of impotence and ill-temper. To the children of Šibenik the Festival brings twofold joy: the end of a school year marks the beginning of the Festival and it is hardly awaited since it is a kind of monopoly on play, that colours, babbles and sets the town loose, turning it into a site for any kind of mystery and opportunity, liberating it from the pose and phrase, from ill-temper and anxiety. For, it jumps, sings, dances, acts, juggles, paints, draws, makes all what the children do in kindergartens, first class, eight class end even those in higher classes and older. The Festival days are like an interspace, that (broke free from the usual course of events, an international children’s interspace visited by unusual living beings "of sparkling eyes, rosy cheeks, mouth always ready for laughter", as already some time ago noticed and written down for his Hobbits, by the great master Tolkien! This is the time of festivity and wonder, invaded from all continents, in all thinkable casts and directions, by fairy-tales, fables, dolls, plays, shadows and masks, music, songs, dance… Magicians, witches, Caesars, chimney-sweepers, pucks, dragons, kings, knights, dwarfs, old witches, princesses, musketeers, queens, giants, beggars, captains… all flow in. Oh, what kind of clothes, costumes! And they are presented in theatre, at summer stage, they beset you in narrow streets, on staircases, in squares, in porches, at corners, along the waterfront, even at sea…and they conquer the town and citizens! It is not rare that in this Hobbit-town of Šibenik the gravitation sometimes cedes and both - domestic and foreign people, performers and the public, stray among extraterrestrials! They return when the festival is over! Official festival’s greeting is: "Hello youngsters, hello everybody!” There are no official prizes, the only and the greatest is to be here, at this world’s meeting point. In the outspread tree-crown of the Festival important are also domestic workshop programs. There is an abundance of those, and they are constant as waves – always new, newer and the newest. Already more than a century, the children of Šibenik in their workshops - supported by the persistence of their mentors and their own talents - keep inventing and telling stories on their town and their festival, on themselves, creating in paper, colour, clay, plaster, stone, textile, glass, performing by microphone, camera, with drums and percussions… Overwhelming is the lightness of child’s ingenuity and creation that gives an additional dimension to the Festival: apart from being presenting, visiting, professional, it makes it also a domestic, creative, artistic event. And even more important is that, with a little help from adults, all this is created by children themselves, children that are the veritable reason, goal and purpose of this unique festival in the world. So, let us repeat once again: - Where is Šibenik? - There where the International Children’s Festival is! Go ahead then: - Write to/about the Festival, fix the stamp and post it! Ksenija Erceg