2020 The 1150th Anniv. of the Consecration of St. Methodius, Archbishop of Great Moravia and Pannonia - Miniature Sheet 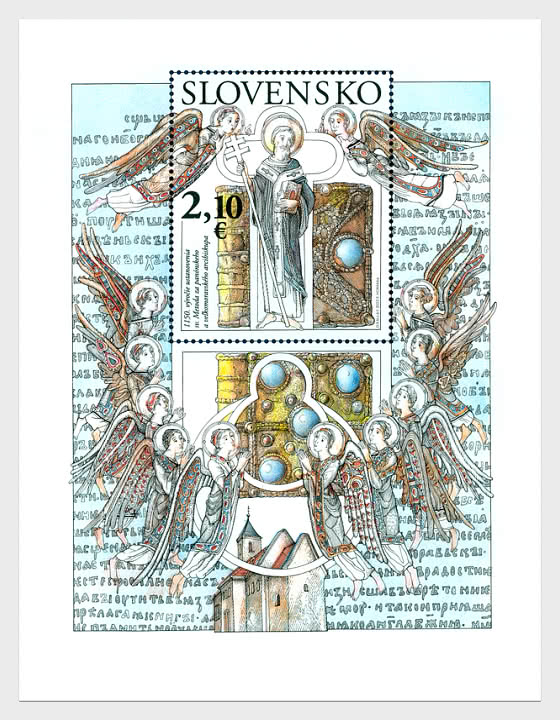 2020 The 1150th Anniv. of the Consecration of St. Methodius, Archbishop of Great Moravia and Pannonia - Miniature Sheet for only GBP £1.93

About The 1150th Anniv. of the Consecration of St. Methodius, Archbishop of Great Moravia and Pannonia

It is assumed that St. Methodius was consecrated as the Archbishop of Pannonia at the turn of 869. The original seat of the archdiocese was in Sirmium (Sremska Mitrovica), however, the administration failed during the Avar invasion in the 6th century. The Roman Curia adopted a decision to establish an ecclesiastical jurisdiction, not only in Pannonia, but also in neighbouring Great Moravia. This postage stamp, issued by Slovenská pošta, a. s., is the final piece in a series inspired by the Saints Cyril and Methodius. The previous issues also celebrated Old Slavic literature of exceptional importance, in particular, the Evangeliarum Assemani (2013) and the Codex Zographensis (2018). The postage stamps with these motifs were issued in cooperation with the Vatican City State.
This issue depicts the Old Slavic text Words of Praise for Saints Cyril and Methodius which was written immediately after the death of St. Methodius. It is the oldest preserved literature written in the Cyrillic alphabet and comes from the 12th century. It is a Russian version of the text created in the Assumption Cathedral in Moscow (Uspenskij sobor). It is based on The Life of St. Constantine and The Life of St. Methodius, but some historical events are examined in greater detail; for example the consecration of St. Methodius as an archbishop by Pope Adrian II: “Adrian, bishop, a servant of the servants of God, to Rastislav, Svatopluk a Kocel. Gloria in excelsis Deo: et in terra pax hominibus bonae voluntatis. As we have heard of your spiritual progress that will contribute to your salvation, we have decided to send our brother, the reverend Methodius, a consecrated archbishop, to your country’.”
The postage stamp itself is a symbolic portrayal of St. Methodius, which was inspired by the oldest known frescos of his portrait from San Clemente al Laterano (Rome). In the background is the floor plan of the Great Moravian triconch church at Devín. The portrait includes the bishop’s insignia: pallium – a band embroidered with crosses and a crosier with a Byzantine double cross. There are adoring angels on each side of St. Methodius, also loosely inspired by the period frescos from the Basilica of San Clemente. The background of the postage stamp also shows the metal clasp of a belt in the form of liturgical books which come from grave No. 1735 in the burial ground at Kostelisko, located in the Great Moravian fortified settlement, Valy, near Mikulčice. The bottom of the miniature sheet includes other examples of ecclesiastic architecture probably related to the pastoral activities of St. Methodius: the floor plan of the Great Moravian rotunda discovered at hill fort Kostolec near Ducové and St. George Church in Kostoľany nad Tríbečom.
The FDC surcharge shows the back of the Great Moravian belt clasp that depicts an orant – a bishop (St. Methodius?) which was discovered in grave No. 100 at church No. II, at Valy, near Mikulčice. The background also shows the Cyrillic manuscript, from the Assumption Cathedral. The postmark is based on a lead cross that depicts the crucified Christ found in hut No. II in the settlement near the Great Moravian Basilica at Sady, close to the town of Uherské Hradiště, which might have been a missionary centre for the Byzantine Apostles.
Martin Vančo