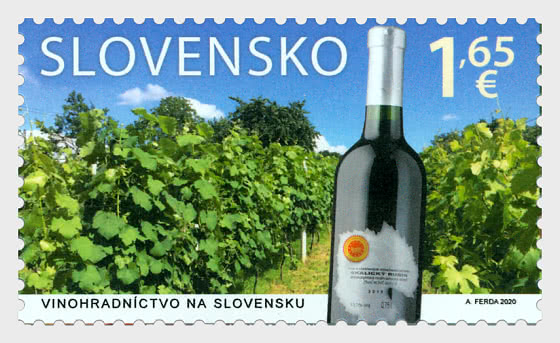 About Joint Issue with Malta - Viticulture in Slovakia

The postage stamp Slovak Viniculture is devoted to Skalický rubín, a unique branded wine that received, based on Commission Implementing Regulation (EU) 2017/2328, a protected designation of origin (PDO) label in 2017. Vines have been grown in the area surrounding what is today Skalica from as early as the Great Moravian Empire. This has been confirmed by the discovery of viniculture knives from the 9th century that were found in a burial ground at Kopečnica. The first written mention of the local viniculture dates from 1450; it speaks about Dionisius of Secs, the Archbishop of the Esztergom Diocese and cardinal, who made the denuded and restored vineyards, the Novosády, exempt from tithe.
Skalický rubín is based on a clone of the Blaufränkisch − Lampart that was allegedly brought to the town of Skalica by the Franciscans or Carmelites from Northern France in the 16th century. Since then the wine has become significant in the culture and lifestyle of the inhabitants of Skalica and the surrounding area. It also provided them with a new way to earn a living and to develop spiritually. As a branded wine, Skalický rubín officially dates back to 1926. However, Pavel Blaho, an intellectual, Hlasist and physician, first named this red wine from his home town as early as 1895 at an exhibition in Prague. The town of Skalica approved the sale of Skalický rubín in wineshops in 1932 and granted its consent to use the town emblem on the bottle labels in 1933.
Skalický rubín is a red wine produced by the fermentation of grapes of the Blaufränkisch, St. Laurent and Blauer Portugieser varieties or a coupage of these varieties, with at least 70% Blaufränkisch and the rest of the other two varieties in any desired proportions or only one of these two varietesThe grapes must be grown in the precisely defined area of Vintoperk Hill; in areas that are part of Skalica, Mokrý Háj, Popudinské Močidlany, Prietržka, Radošovce and Vrádište.
On the postage stamp is depicted the vineyard below Vintoperk Hill with the bottle of wine Skalický rubín (2019) from the Slovak National Collection of Wines made by Tureček Winery from grapes of Vysoké Pole Winery of Gajda vineyard family. On the FDC is presented a vineyard hut typical of the Skalica region owned by the Mitták family in the 19th century. The vineyard hut is located in the valley of the Krátke vysoké pole vineyard. Features of the hut typical for this area include the stone work in the pressing room and the wooden walkway on the first floor, an extension which was added by Dušan Samuel Jurkovič at the beginning of the 20th century. The hut certainly existed before the 19th century, if not even earlier. As proof we have the literary work by Svetozar Hurban Vajanský. While he practised law in Skalica he often visited the hut of his friends, the Mitták family and inspired by the red wine from its cellar he wrote the novella Duchovia sudov. Obrázok z novejších časov (The Spirits from Barrels). A Picture of Recent Times.), “typeset and published by Jozef Škarnicl in 1874”.