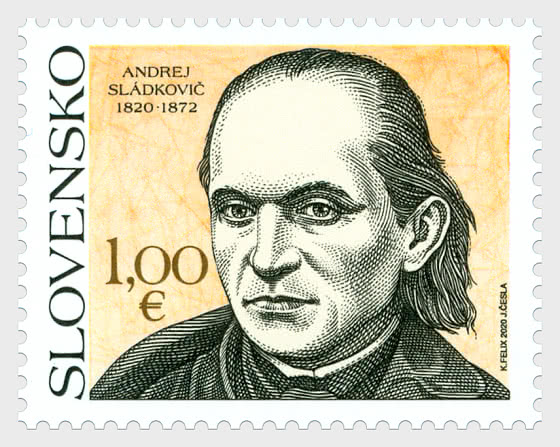 The poet, translator, literary critic and Evangelical priest, Andrej Sládkovič, born Andrej Braxatoris, established himself in Slovak culture as “the first poet” of the Romantic generation and the author of two key poems of Slovak literary Romanticism – Marína (a love poem, first published in 1846, which celebrates the love of a woman, beauty, youth and Slovakia) and Detvan/The Man from Detva (an idyllic epos from 1853 which celebrates Slovak people and the countryside). At the same time, Marína was the first and only book of poetry published in the 1840s in standard Slovak. Both poems reflected a turning point in the development of Slovak Romantic poetry, as Sládkovič broadened the set of creative poetry writing tools and devices, enhancing the degree of sensitivity and focus on the subject and the conflicts in their internal emotional life. His poetic concept united the love of a woman, his homeland and God into a single whole. However, his works include many different literary genres and types – intimate lyrical poetry, philosophical texts (Sôvety v rodine Dušanovej/Conversations in the Dušan Family), religious and meditative poetry, historical epic poems (Gróf Mikuláš Šubić Zrínsky na Sihoti/Count Nikola Šubić Zrinski at Sziget), patriotic, occasional and didactic poems and prose and drama pieces. His articles about topical national and political events were also published in period newspapers and magazines. In 1861 Sládkovič attended the memorandum gathering in Turčiansky Sv. Martin which inspired his poem Pamiatka na deň 4. augusta/In Memory of the 4th August and the national epos Svätomartiniáda/Saint Martin’s Events. In 1863 he co-founded the new national association, Matica slovenská. Promoting Slavic patriotism and the national rights of Slovaks, he has been viewed as a poet of harmony and idyll.